Exhibition on Hiroshima depicts city’s history of devastation and reconstruction 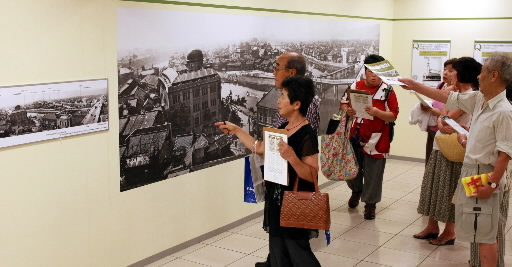 An exhibition marking the 120th anniversary of Hiroshima becoming a municipality opened at Fukuya Department Store in Hatchobori on August 20. The exhibition is hosted by the City of Hiroshima and supported by the Chugoku Shimbun. Through the display of about 370 items, including photographs and documents, the exhibition looks back at the history of this city of 1,170,000 people.

The exhibition includes some valuable artifacts: a Japanese woodblock print depicting the town landscape around the time of the Sino-Japanese War which started five years after Hiroshima became a municipality in 1889; photos of the Hiroshima Prefectural Industrial Promotion Hall (now, the A-Bomb Dome) and its surroundings taken by the late Wakaji Matsumoto before World War II; and letters addressed to city officials from the late Kenzo Tange, who designed Peace Memorial Park.

A film is also being shown to recount the city’s reconstruction period. One of the main subjects of the film is the former municipal baseball stadium which was completed 12 years after the atomic bombing.

The exhibition also features the re-creation of a living room and dining room commonly seen around 1960 to introduce the daily life of those days. And a school lunch prepared with whale meat, a typical meal from that same time period, can be tasted for 400 yen.

Keiko Izumida, 60, a Hiroshima resident who visited the exhibition, said, “The exhibition brought back fun memories of having meals at a low, round table with the whole family together.”