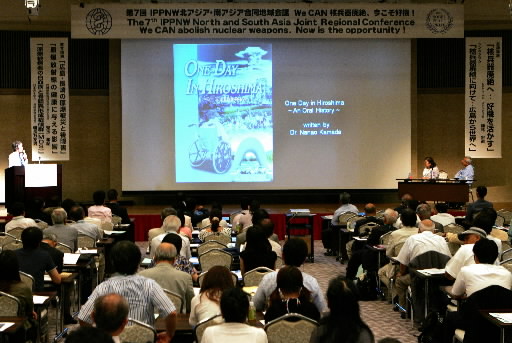 The International Physicians for the Prevention of Nuclear War (IPPNW) opened its North and South Asia Joint Regional Conference at the International Conference Center Hiroshima on August 22. About 40 medical doctors and students, from Japan and seven overseas nations, including such countries as China, India, and Pakistan, which possess nuclear weapons, are taking part. The organization also organized a symposium with roughly 200 citizens in attendance where the participants shared their views on specific measures for eliminating nuclear weapons.

At the general meeting, the delegates from various countries presented their efforts. One delegate proposed that the IPPNW implement a campaign calling for the total elimination of nuclear weapons by a specified deadline. Following the general meeting, Hiromichi Umebayashi, special adviser to Peace Depot, an NPO located in the city of Yokohama, near Tokyo, delivered the keynote address in which he proposed concluding a Nuclear Weapons Convention and expanding nuclear-weapon-free zones as approaches toward abolishing nuclear weapons.

At the symposium, with a panel of five experts on nuclear issues, Tatsujiro Suzuki, visiting professor at the University of Tokyo, outlined an idea for the multilateral management of nuclear fuel, which could prevent nuclear proliferation.

Jargalsaikhany Enkhsaikhan, the Mongolian ambassador to Austria, stressed the significance of the no-first-use declaration involving nuclear arms and said, “I call on nations which stand under a nuclear umbrella, including Japan, to act to change the thinking of countries holding nuclear weapons.”

Motofumi Asai, president of the Hiroshima Peace Institute of Hiroshima City University, pointed out the role of civil society and said, “It is our urgent task to generate enough energy to bring U.S. President Barack Obama to the side of eliminating these weapons.”

On August 23, lectures were held and medical students reported on their activities at the North and South Asia Joint Regional Conference of the International Physicians for the Prevention of Nuclear War (IPPNW), held at the International Conference Center Hiroshima. At the closing ceremony, IPPNW adopted the “Hiroshima Declaration,” which calls on nations to embark on efforts for a nuclear weapons convention and the Northeast Asia Nuclear-Weapon-Free Zone. IPPNW then closed its two-day session.

The Hiroshima Declaration, read out by Dr. Shizuteru Usui, president of Japanese Physicians for the Prevention of Nuclear War, was approved with applause. The declaration stresses the importance of multilateral treaties to advance nuclear disarmament, including the Comprehensive Test Ban Treaty (CTBT) and a treaty banning nuclear weapons. Regarding a nuclear-weapon-free zone, the declaration encourages the early realization of the Northeast Asia Nuclear-Weapon-Free Zone and efforts to fulfill a nuclear-weapon-free zone in South Asia.

The declaration also calls for three points, including “the safety of human health and protection of the environment” in connection with the peaceful use of nuclear energy, while it backs “the Hiroshima-Nagasaki Protocol,” which Mayors for Peace has proposed. The declaration regards U.S. President Barack Obama’s potential visit to the A-bombed city of Hiroshima as “a new step” toward nuclear abolition, and indicates IPPNW’s stance of supporting the movement in Hiroshima to invite Mr. Obama.

This regional conference was the first North and South Asia joint conference. Livtar Singh Chawla, president of IPPNW-India, remarked at a news conference after the IPPNW conference: “We will continue our efforts to appeal for the abolition of nuclear weapons. I have reaffirmed my determination in Hiroshima.”

U.S. President Barack Obama stated in Prague this April that “the United States would take concrete steps towards a world without nuclear weapons.” Since then, global attention and hopes have been enhanced for the abolition of nuclear weapons. At this very opportune point in time, IPPNW has held the IPPNW North and South Asia Joint Regional Conference here in Hiroshima―the city devastated 64 years ago by an atomic bomb for the first time in the history of the world―and has reconfirmed the belief that the abolition of nuclear weapons is absolutely necessary to protecting the human health and global environment.

In order to realize a world without nuclear weapons, a comprehensive legal framework based on a viable verification system in the form of a “Nuclear Weapons Convention” is needed. We strongly support international treaties concerning nuclear disarmament: above all, Nuclear Non-Proliferation Treaty (NPT), Comprehensive Nuclear Test Ban Treaty (CTBT), Fissile Material Cut-off Treaty (FMCT), and other bilateral or multilateral nuclear weapon reduction treaties. We consider these treaties necessary for materializing a “world without nuclear weapons,” as well as for controlling nuclear weapons possessed by the nuclear weapon states pending the abolition thereof. We in IPPNW have been calling for the abolition of nuclear weapons through dialogues with decision makers, as well as in collaboration with other like-minded NGOs. We strongly support the “Hiroshima-Nagasaki Protocol” proposed by the Mayors for Peace. We also request the International Commission on Nuclear Non-proliferation and Disarmament (ICNND) to include specific proposals for time-frame and concrete measures for the ultimate nuclear abolition in its recommendation to be submitted by the end of this year.

Pending the realization of a world without nuclear weapons, nuclear weapon-free zone treaties are useful for paving the way to peaceful coexistence through dialogue. With regard to Northeast Asia, a realistic concept has already been proposed for the regional treaty establishing such zone. Recent DPRK’s nuclear tests have dampened the regional atmosphere, but hopefully the framework of six-party talks still remains. We strongly urge regional governments to take positive steps for an early realization of a Northeast Asia nuclear weapon-free zone. We would welcome similar steps to be taken by regional governments in South Asia.

In light of the increasing number of nuclear power plants and facilities across the world aiming to reduce greenhouse gas emission, we demand the safety of human health and the protection of environment, the prevention of the spread of nuclear fissile materials and sensitive technology, and the application of safeguards to avoid military diversion. Above all, adequate framework and technology need to be developed to stop the production of weapons-grade fissile material by way of enrichment and reprocessing of nuclear fuels.