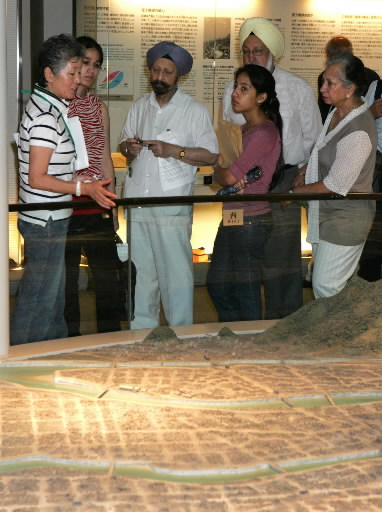 Medical personnel from eight Asian countries including China, India, and Pakistan, nations which possess nuclear weapons, visited Hiroshima Peace Memorial Museum on August 22. Witnessing the horrific nature of the atomic bombing, they have renewed their determination to work for the elimination of nuclear weapons.

The doctors were participants of the IPPNW North and South Asia Joint Regional Conference, which opened on the same day in Hiroshima. A total of 25 people toured the museum escorted by a volunteer guide. They looked at panoramic models of the city center, representing the conditions in Hiroshima both before and after the bombing, and other exhibits such as photographs showing the keloids of A-bomb survivors.

Syed Tipu Sultan, 63, who was visiting Hiroshima for the first time from Pakistan, remarked, “Many people in Pakistan are not aware of the damage caused by the atomic bombing, let alone the aftereffects of radiation. When I go back, I would like to disseminate what I have seen here in Hiroshima.” Arun Mitra, 57, from India emphasized, “The cruelty of the bombing leaves me at a loss for words. I pledge that I will do everything I can to help achieve the abolition of nuclear weapons. Nuclear weapons should be eliminated from the entire world, including India.”

Liu Zhi, 57, from China, explained his country’s stance, saying, “China hopes to abolish nuclear weapons and is ready to promote nuclear disarmament in cooperation with other nations.” Added Mr. Liu: “Multilateral dialogue is needed to relinquish nuclear weapons. To achieve this goal, the citizens of the world must raise their voices.”