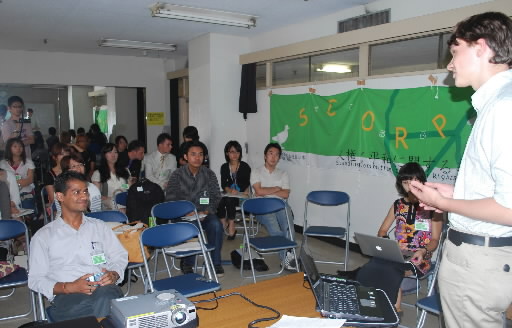 Ten medical students from seven countries in Asia, South America, and Europe are in Hiroshima to study subjects related to the atomic bombing, such as the actual damage wrought by the blast and the effect of radiation on the human body. Along with 18 Japanese medical students, they exchanged views on nuclear issues at the Hiroshima Youth Center on August 20.

Bishow Aryal, 26, from Nepal stressed, “In South Asia, we keenly feel the danger of a nuclear attack. That’s why it’s important to call on the governments of neighboring countries and the people in the region to abandon nuclear weapons.” Nadia Mohd Damanhuri, 20, who is from Malaysia and now studies in Egypt, remarked, “Through this visit, I learned for the first time about Malays who were exposed to the bombing in Hiroshima. The bombing here has relevance to Malays, too.”

Emi Igarashi, 20, a student at Fukushima Medical University, and two other Japanese students reported on the fact that most young people in Japan have little interest in issues related to the atomic bombings. They emphasized that the A-bombed nation needs to be proactive in rousing public opinion for the abolition of nuclear weapons.

Both the foreign and Japanese students are participating in the Hiroshima Summer School organized by the International Federation of Medical Student Associations-Japan from August 18. On the morning of August 21, they visited the Hiroshima Red Cross and Atomic Bomb Survivors Hospital to look at the pathological specimens which doctors in Hiroshima had collected soon after the bombing.

The students will also organize a joint symposium, open to the public, in cooperation with a student body of the IPPNW at Hiroshima International Conference Center starting at 8:30 a.m. on August 22. From the standpoint of medical students, they will discuss efforts for the abolition of nuclear weapons and peace.