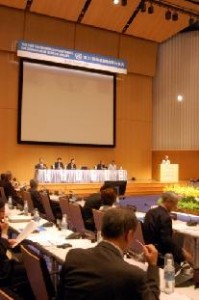 The twenty-first United Nations Conference on Disarmament Issues opened in Niigata on August 26. For three days, through August 28, about 90 government officials and experts from 21 countries will engage in discussion under the theme of “From Niigata to the World: Renewed Determination and Action toward a Nuclear Weapon-Free-World.”

Hirohiko Izumida, governor of Niigata, offered welcoming remarks at the opening ceremony as the representative of the hosting prefecture. He referred to the abduction of Japanese citizens by North Korea, appealing, “Unless the denuclearization of the Korean Peninsula moves forward, the abduction problem will see no progress. Creating a path toward nuclear disarmament is critical.”

Following Mr. Izumida, Kanat Saudabayev, secretary of state of the Republic of Kazakhstan, the nation where the Semipalatinsk nuclear test site established by the former Soviet Union is located and nuclear weapons used to be deployed, delivered the keynote speech. Mr. Saudabayev said, “We chose the path of peaceful development without nuclear weapons when we became an independent state from the Soviet Union. This fact provides the greatest security for our nation.”

In the afternoon, substantive discussions have started. On both August 26 and 27, the participants will deliberate a variety of issues including efforts to bring the Comprehensive Test Ban Treaty (CTBT) into effect and the prospects and challenges of the Nuclear Non-proliferation Treaty (NPT) Review Conference. On August 28, the conference will wrap up with a final session and a closing ceremony.