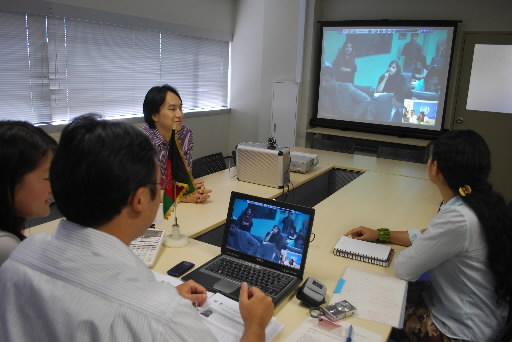 The United Nations Institute for Training and Research (UNITAR) Hiroshima Office held a web conference connecting its office in Hiroshima and a venue in Kabul, the capital of Afghanistan, on August 25. The conference was a preparatory session for a training program to be provided in Hiroshima this November. Thirty-five people who will take part in the training program, including government officials and engineers, gathered for the web conference.

The online system was also connected with Singapore, from where an instructor gave guidance under the theme of “Tools for Performance Maximization.” For about five hours the instructor delved into various issues, such as the role of coaches and how to carry out planning. The participants in Kabul, utilizing some documents at hand, also tried role playing in several groups.

The training program is part of the Afghanistan Scholarship Project, which was established with subsidies from the city and prefecture of Hiroshima in 2003 by the UNITAR Hiroshima Office in order to nurture leaders who would be involved in reconstructing their nation.

Jamal Nasir Pashtun, 33, one of the trainees and the Program Officer at the United States Agency for International Development, remarked, “In Afghanistan, there is a shortage of human resources both in the public and private sectors. The training is practical and quite effective.” Nillab Waez Atahi, 27, another trainee and the Head of the Planning and Reporting Section of the Independent Administrative Reform and Civil Service Commission, expressed her enthusiasm for the program in Hiroshima, stating, “I would like to confirm with my own eyes how Hiroshima was rebuilt from the ashes in the wake of the atomic bombing.”