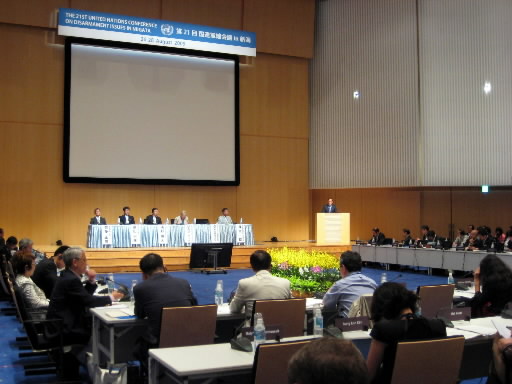 The twenty-first United Nations Conference on Disarmament Issues, organized by the United Nations Office for Disarmament Affairs and the United Nations Regional Center for Peace and Disarmament in Asia and the Pacific, opened in Niigata, Japan on August 26. For three days, through August 28, about 90 government officials and experts from 21 countries will engage in discussion under the theme of “Renewed Determination and Action toward a Nuclear Weapon-Free-World.”

In the first-day plenary session, Susan Burk, special representative of the President for Nuclear Non-Proliferation of the United States, explained the proactive effort being taken by the Obama administration for the success of the Nuclear Non-proliferation Treaty (NPT) Review Conference to be held next May. At the same time, speaking of the possibility of the U.S. Senate’s ratification of the Comprehensive Test Ban Treaty (CTBT), Ms. Burk said, “It will be difficult to realize this goal by the NPT Review Conference.”

In response to Ms. Burk’s comment, Khaled AbdelHamid, from Epypt, the special assistant to the Executive-Secretary of the Preparatory Commission for the Comprehensive Nuclear-Test-Ban Treaty Organization, asked for further efforts by the United States. “Forward movement by the nuclear powers is absolutely critical,” he said.

Gareth Evans, co-chair of the International Commission on Nuclear Non-proliferation and Disarmament (ICNND) and a former foreign minister of Australia, spoke of the ICNND report to be complied by the end of this year, remarking, “It will present realistic measures for advancing toward nuclear zero. After issuing the report we will continue to appeal for our viewpoint at every possible opportunity.”

The denuclearization of the Korean Peninsula was another item on the agenda discussed during the plenary session. Yingfeng Jiang, deputy division director of the Department of Arms Control and Disarmament at the Ministry of Foreign Affairs of the People’s Republic of China, called for “a solution through political and diplomatic channels” by an early resumption of the six-party talks. To the contrary, Hideya Kurata, professor at the National Defense Academy, expressed his pessimistic view about North Korea returning to the talks. Professor Kurata argued for stronger pressure from neighboring countries, stating, “Without taking some risk, we will never achieve a breakthrough.”

In the opening ceremony held prior to the plenary session, Kanat Saudabayev, secretary of state of the Republic of Kazakhstan, delivered the keynote speech. Mr. Saudabayev said, “We chose the path without nuclear weapons when we became an independent state from the former Soviet Union. This fact provides the greatest security for our nation.”