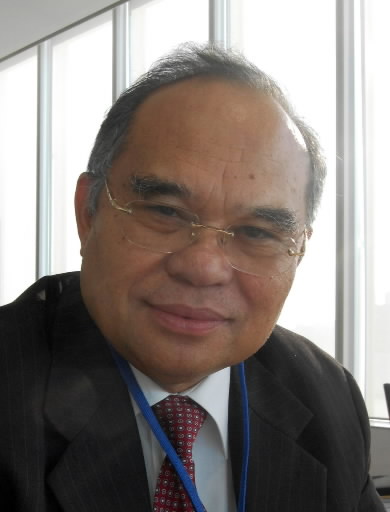 Libran N. Cabactulan, 59, ambassador of the Republic of Philippines to the United Arab Emirates, will serve as president of the Nuclear Non-proliferation Treaty (NPT) Review Conference, slated for May 2010 in New York. The Chugoku Shimbun spoke with him on August 27 in Niigata about the prospects of the NPT Review Conference. Mr. Cabactulan expressed optimism, stating, “Political will and leadership are critical to its success. These essential elements have been growing.”

Mr. Cabactulan is attending the twenty-first United Nations Conference on Disarmament Issues being held in Niigata from August 26 to 28. In particular, he has welcomed the effort by U.S. President Barack Obama for the U.S. ratification of the Comprehensive Test Ban Treaty (CTBT). “His enthusiasm is providing momentum for the success of the NPT Review Conference,” said Mr. Cabactulan.

At the same time, he favors advancing discussion for all three pillars of the NPT: disarmament, non-proliferation, and the peaceful use of nuclear energy. He also pointed out that, due to the lack of progress in regard to agreements made at past conferences, “the signatories have been feeling some dissatisfaction.” These agreements include the establishment of a zone free of weapons-of-mass-destruction in the Middle East as well as the 13 disarmament measures including “an unequivocal undertaking by the nuclear-weapon States to accomplish the total elimination of their nuclear arsenals.”