Baseball manager Brown steps up to bat for nuclear abolition 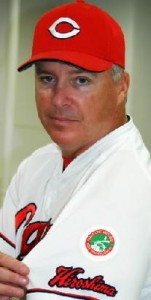 On August 27, Marty Brown, manager of the Hiroshima Toyo Carp, the local professional baseball team, spoke of the significance of the “Peace Nighter” to be held at the Mazda Zoom-Zoom Stadium on September 15. “As a baseball team whose home is the first A-bombed city, we want to appeal to a wide audience, through baseball, for the abolition of nuclear weapons,” he said.

Mr. Brown made this comment at a news conference in which he officially announced details of the Peace Nighter. He modeled a patch that would be added to the sleeve of the uniforms worn by the players of the team that day. The design of the patch incorporates images of both the A-bomb Dome and the new baseball stadium.

The Hiroshima Toyo Carp will face the Chunichi Dragons in the Peace Nighter, which will begin at 6 p.m. About 900 people in green T-shirts will sit in rows in the stands behind the infield, on the second level of the stadium, to create a 25-meter-tall “Peace Line,” the height of the A-bomb Dome. Green posters will also be distributed to the spectators who will hold them up in unison after the third and fifth innings to send a message regarding nuclear abolition and world peace.