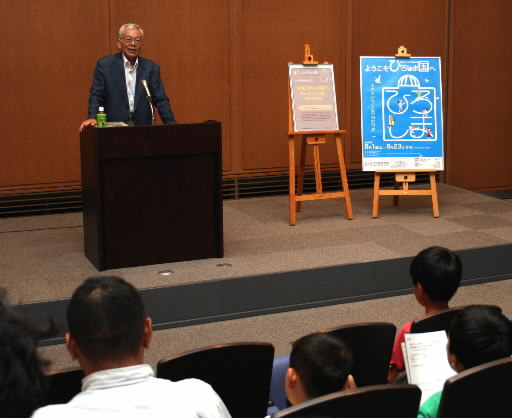 On August 28, Masamoto Nasu, 67, a resident of the city of Hofu in Yamaguchi Prefecture and a writer of children’s literature known for the series “Zukkoke Sanningumi” (“The Goofy Trio”), spoke to an audience of about 50 people at the Japan Newspaper Museum in Yokohama, where an exhibition on “Peace Seeds,” a peace newspaper produced by Hiroshima teens, is being held. Mr. Nasu, with a touch of humor, related his A-bomb experience and talked about why he has worked on A-bomb-related books.

Mr. Nasu experienced the atomic bombing at age three at his home in Nishi Ward, Hiroshima. He said he could not forget the wonderful taste of mandarin oranges from a can given to him by someone who had stolen it from the ruins of the flames. He also confessed that, as a child, he would flee to a closet whenever he heard a loud noise. “Though I wasn’t aware of it at the time, I think the atomic bombing traumatized me,” he said.

Mr. Nasu explained that he wrote Children of the Paper Crane, a nonfiction account about Sadako Sasaki, early in his career on the recommendation of a senior writer and also shared how he came to work on the illustrated book Hiroshima no Genbaku (“Hiroshima: A Tragedy Never to be Repeated”). He then made an appeal to the audience, saying, “Japan is an A-bombed nation. I hope all Japanese will think of themselves as A-bomb survivors, listen to accounts of the atomic bombings, and convey these accounts to others.”

Rumiko Seya, secretary general of the Japan Center for Conflict Prevention will speak at the exhibition venue on August 29. The Peace Seeds exhibition continues through September 23, except Mondays. Please call the Japan Newspaper Museum at 045-661-2040 for further information.