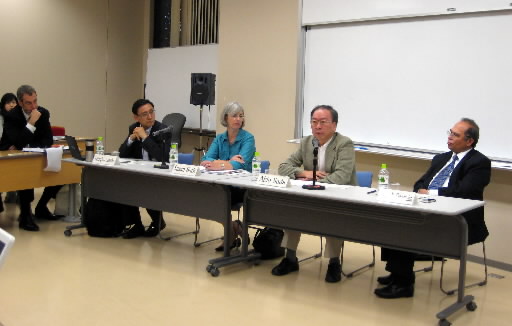 On August 29, senior government officials from nations that will participate in the Nuclear Non-proliferation Treaty (NPT) Review Conference next May discussed the prospects for the NPT Review Conference at an international symposium held at Hitotsubashi University in Kunitachi City, Tokyo.

Libran N. Cabactulan, ambassador of the Republic of the Philippines to the United Arab Emirates, who will serve as chair at the NPT Review Conference, said that “various momentum is being created for next spring,” referring to the international community and its growing receptiveness to the idea of nuclear disarmament. He announced his intention to urge each government to seek a position of agreement at the NPT Review Conference and further this momentum toward disarmament in collaboration with citizens and the mass media.

Susan Burk, special representative of the U.S. President for Nuclear Non-proliferation, the U.S. government representative with responsibility for the NPT Review Conference, shared the administration’s enthusiasm for the gathering, citing U.S. President Barack Obama’s speech in Prague advocating “a world without nuclear weapons.” At the same time, regarding the three pillars of the NPT--nuclear disarmament, nuclear non-proliferation, and the peaceful use of nuclear energy--she stressed anew that “these three pillars are intricately linked and all of them are important.”

Ambassador Akio Suda, head of the Delegation of Japan to the Conference on Disarmament, explained Japan’s policy on nuclear disarmament and non-proliferation, including Japan’s contribution to enhancing the inspection regime of the International Atomic Energy Agency (IAEA).

The symposium was part of the first research conference of the Japan Association of Disarmament Studies chaired by Mitsuru Kurosawa, professor at Osaka Jogakuin College. Young scholars also presented the results of their research at the symposium.