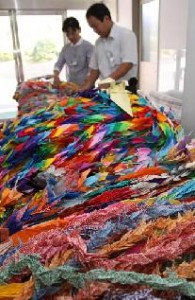 The City of Miyoshi, located in the northeastern part of Hiroshima Prefecture, will offer paper cranes folded by its citizens to the Children’s Peace Monument in Peace Memorial Park on September 10. The city has collected about 15,000 paper cranes so far, and is continuing to accept them if brought in by September 9.

The city held a touring exhibition, consisting of picture postcards on peace and photo panels of the Battle of Okinawa, from July 2 to August 31 at ten different locations. At the venues, visitors were encouraged to fold paper cranes to think about peace and about two thousand cranes were collected during the run of the exhibition. In addition, the city received paper cranes from various citizens groups including the Mirasaka Association for Peace.

Thousands of paper cranes, large and small, have piled up on the desks of the Miyoshi City Youth and Women’s Center. Some of the cranes were not strung together and staff members at the Community Development Division will do so before offering them to the monument.

Kenichi Nakagaki, 34, the city official in charge of the cranes, said, “Looking at all these cranes, I keenly feel the people’s sincere wish for peace. I will make sure that the paper cranes, along with the sentiments of the citizens of Miyoshi, are safely delivered to Hiroshima.”