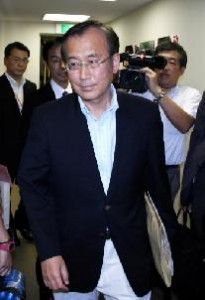 Hiroshima Mayor Tadatoshi Akiba visited Yukio Hatoyama, president of the Democratic Party of Japan (DPJ) which will form a new government, at the party’s headquarters on September 7. Mayor Akiba presented a petition jointly issued with the City of Nagasaki, urging Mr. Hatoyama to actively promote the abolition of nuclear weapons and the provision of support to A-bomb survivors.

Mr. Hatoyama, who will soon assume the position of prime minister, is planning to speak at the United Nations General Assembly at the end of September. In his meeting with Mr. Hatoyama, Mayor Akiba explained the Hiroshima-Nagasaki Protocol advocated by Mayors for Peace, for which he serves as president. The protocol lays out a path for achieving the total elimination of nuclear weapons by the year 2020. The mayor asked Mr. Hatoyama to urge other nations, through his speech at the United Nations and other means, to provide support so that the protocol can be adopted at the Nuclear Non-proliferation Treaty (NPT) Review Conference.

According to Mayor Akiba, Mr. Hatoyama said, “I fully understand the sentiments of your two cities. I will study the matter.” “His reaction was very favorable,” added the mayor, with a sense of optimism.

The petition includes requests for the national government’s support in regard to inviting U.S. President Barack Obama and other state leaders of nuclear weapon nations to Hiroshima and Nagasaki as well as for promoting the recognition granted by the A-bomb disease certification system from the viewpoint of the needs of A-bomb survivors. From the City of Nagasaki, Norihiro Kamichika, director of the city’s Tokyo Office, accompanied Mr. Akiba.