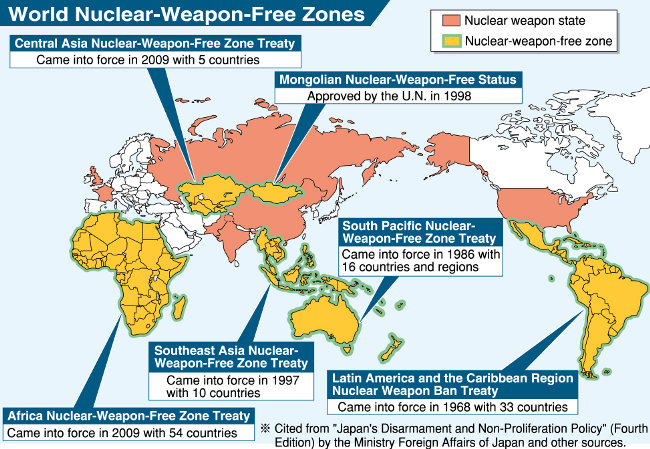 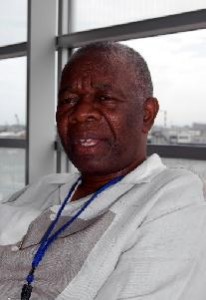 The African Nuclear-Weapon-Free-Zone Treaty, also called the Pelindaba Treaty, has come into effect. This treaty prohibits the development and deployment of nuclear weapons throughout the African region. With its enactment, the world’s five nuclear-weapon-free-zone (NWFZ) treaties are now all in effect. Since Mongolia has declared itself as having single state nuclear-weapon-free status, currently 119 countries, which is more than half of the 192 member countries of the United Nations, have been covered by the "non-nuclear umbrella."

The Pelindaba Treaty covers 54 African nations including Western Sahara, a non-U.N. member country which Japan has not recognized as an independent state. This treaty bans the development, manufacture, acquisition and possession of nuclear weapons and experiments involving nuclear explosive devices. A body to verify the observance of the treaty will be established and this body will act to promote the peaceful use of nuclear energy.

A nuclear test conducted by France in Algeria in 1960 gave momentum to the quest for a NWFZ treaty. After South Africa voluntarily abandoned its nuclear weapons, the treaty was finalized in Pelindaba, South Africa, in 1995, and 42 nations signed it in 1996. For the treaty to go into effect, at least 28 nations had to ratify it. With the nation of Burundi ratifying the treaty this past June and having submitted its ratification to the African Union on July 15, the treaty then took effect.

On the other hand, the protocols of the treaty, in which the nuclear powers agree not to use or threaten to use nuclear weapons against any treaty party, have not come into effect as the United States and Russian Federation have not ratified them.

Significance of the treaty taking effect: an interview with Boniface Guwa Chidyausiku, Zimbabwe's ambassador to the U.N.

The Chugoku Shimbun interviewed Zimbabwe's ambassador to the U.N., Boniface Guwa Chidyausiku, 58, who recently visited Japan, about the significance of the treaty's enactment.

What do you think is the significance of the treaty taking effect at this time?
The whole of Africa has made it clear that we should not possess nuclear weapons or allow other countries to bring them into or deploy them on the continent. It is a very positive message in anticipation of the 2010 Nuclear Nonproliferation Treaty (NPT) Review Conference.

Though it took 13 years for the treaty to take effect after it was signed, this was not due to specific obstacles; it was only a matter of formalities. Each national assembly has its own priorities in regard to deliberating the ratification of the treaty and so the fact that it took a certain amount of time could not have been helped.

The United States and Russia have not ratified the protocols. Does this compromise the significance of the treaty?
It is true that we cannot be completely free from the terror of nuclear weapons even though we have unilaterally declared our nuclear-weapon-free status. It is essential that all the nuclear powers vow not to resort to nuclear attacks. We should continue calling on the U.S. and Russia to ratify the protocols which stipulate this modest security assurance.

Do you think this treaty will have a positive effect on other parts of the world, including Northeast Asia?
South Africa, which once possessed nuclear weapons but has renounced them, has joined the Pelindaba Treaty. Libya has given up its ambition for a program to develop weapons of mass destruction and has instead chosen a path to national security that does not rely on nuclear weapons.

The first step toward nuclear "zero" is to reject the value and role of these weapons. For other regions of the world, it should be possible to follow Africa’s example. I hope this movement will continue to spread, particularly to the Middle East.