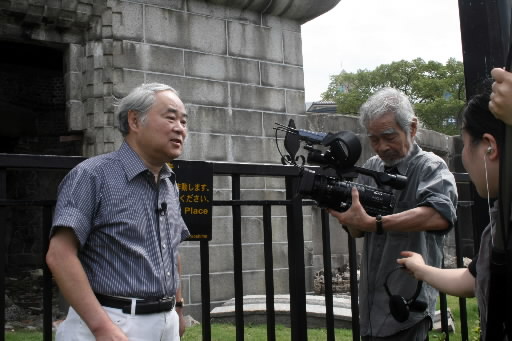 Keiji Nakazawa, 70, a resident of Saitama Prefecture, near Tokyo, has decided to retire from his work as a manga artist due to a cataract that has made it difficult for him to draw the fine lines of his art. Mr. Nakazawa is the creator of the manga series "Barefoot Gen," the story of a boy who survives the atomic bombing of Hiroshima and manages to live through its aftermath. Though the second part of "Barefoot Gen," which he had been planning to create, will not be realized, Mr. Nakazawa is prepared to continue conveying the tragic nature of the atomic bombing through oil painting.

"I apologize to the fans who have been waiting to see how Gen has matured as an adult," Mr. Nakazawa said on September 14, when he shared his A-bomb experience for a DVD recording project undertaken by ANT-Hiroshima, a Hiroshima-based NPO, in front of the A-bomb Dome. He announced his decision to retire while expressing regret over not being able to create the second part of the manga series.

Mr. Nakazawa had been preparing to create the new work "Barefoot Gen, Part 2: Life in Tokyo." However, he experienced some deterioration in the chronic conditions he has suffered, those of diabetes and the cataract in his right eye. Though he had surgery on his eye this past January, his failing vision led him to feel that he could no longer produce professional-level work as a manga artist and so he decided to retire.

Mr. Nakazawa was born in a district near downtown Hiroshima, now known as Funairi Honmachi. He experienced the atomic bombing at the age of six when he was on his way to school. He was near the back gate of Kanzaki Elementary School, a distance of 1.2 kilometers from the hypocenter. When the bomb exploded he was standing behind a wall--he just happened to be stopped by the mother of a friend--and so he escaped direct exposure to the heat rays.

In 1961, Mr. Nakazawa moved to Tokyo, and two years later, at the age of 24, he became a manga artist, the profession he had dreamed of doing. When his mother, also an A-bomb survivor, died in 1966 and he was left with only her delicate, powdery ashes at the crematorium, he seethed with rage. "The atomic bombing even deprived me of my mother's bones," he thought and decided to create a manga work about the atomic bombing.

Even today, this anger drives Mr. Nakazawa, who remarked, "From now on, I plan to express the horrific nature of the atomic bombing in oil paintings on large canvases."

"Barefoot Gen"
"Barefoot Gen" started a serial run in the magazine "Weekly Shonen Jump" in 1973. Readers were drawn to Gen, a boy who lives life fully despite the difficulties he encounters in the aftermath of the atomic bombing. The series was a great success, with a total of 10 million copies sold in book form.

After running in several magazines, the series ended in 1987. Mr. Nakazawa had intended to start a new series "Barefoot Gen, Part 2: Life in Tokyo" in 2002 with the storyline involving Gen going to France to study painting.