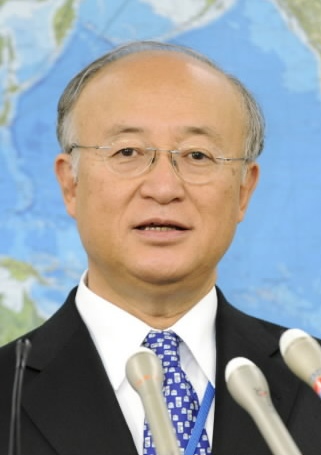 The International Atomic Energy Agency formally approved the appointment of Yukiya Amano from Japan as the next chief of the U.N. nuclear watchdog in an annual general meeting on Monday.

In his speech to the conference, Amano, 62, thanked the IAEA member states and elaborated on his opinion toward challenges the agency is facing, such as increasing energy demand, risk of nuclear terrorism and proliferation, and food security.

''All of these challenges are global issues,'' he said, adding, ''The agency has the ability and responsibility to address them by using nuclear technologies.''

He underlined the importance of cooperation between the IAEA and its member states, civil societies and regional and international organizations, and stressed the need to focus on management of the IAEA so that it ''remains an effective and efficient organization.''

He pledged to ''manage the agency in an impartial and reliable manner.''

The appointment follows his election to the position of the next IAEA director general in a special Board of Governors meeting on July 2.

He will assume the post in December, when incumbent IAEA Director General Mohamed ElBaradei leaves office after holding the post for 12 years.

U.N. Secretary General Ban Ki Moon, in his message to the IAEA conference, thanked ElBaradei for his ''many years of outstanding service to humanity and to international peace and security,'' and expressed his support for his successor.

ElBaradei said in an opening speech to the conference, ''I congratulate my successor, wish him every success and offer him my full support,'' and that he trusts Amano ''will lead the agency with vision, impartiality and courage.''

Amano joined the Japanese Foreign Ministry in 1972. During his career at the ministry, he held several positions including director of the Nuclear Energy Division and director for the Disarmament, Non-Proliferation and Science Department.

In 2005, he was appointed to represent Japan at the international organizations in Vienna.

Amano is married and speaks English and French fluently.