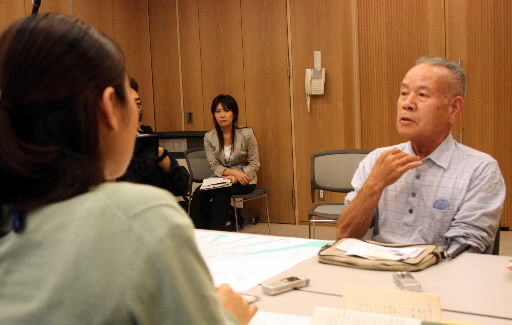 On September 16, Hiroshima National Peace Memorial Hall for the Atomic Bomb Victims in downtown Hiroshima began its fiscal 2009 project to interview atomic bomb survivors (hibakusha) on their A-bomb experiences. On the first day of the project, Tokio Maedoi, 76, who experienced the atomic bombing while working as a mobilized student, visited the hall and shared his memories of that day 64 years ago.

"I was enveloped by a white flash and my body was blown into the air. I thought I was going to die," said Mr. Maedoi. “I saw such hellish scenes in the city. I ran in a panic."

At the time of the bombing, Mr. Maedoi was a first-year student at Misasa National School. He was exposed to the atomic bombing at Misasa Honmachi, about three kilometers from the hypocenter, where he was working as a mobilized student. He suffered burns to his hands and legs. He described his A-bomb experience for about an hour to two staff members of the hall.

After World War II, Mr. Maedoi avoided discussing his experience of the bombing as it was painful for him to recall the scenes of so much death. But his health faltered this past July and he was in the hospital for two weeks. He made up his mind: "I don't have much time left. I have to convey the truth to future generations." He then responded to the hall's call for A-bomb witnesses.

Every year since fiscal 2006, the hall has publicly sought hibakusha who will offer their A-bomb accounts. The hall has so far compiled the A-bomb accounts of 37 hibakusha and made them available for public reading. Seven hibakusha responded to the hall’s call this fiscal year. Their interviews will be completed by the end of November.