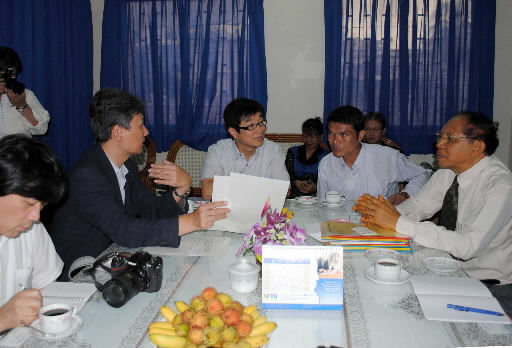 Three university professors from Japan, including Takashi Takata, 55, dean of the School of Dentistry at Hiroshima University, visited the University of Health Science in Phnom Penh, the capital of Cambodia, on September 22. They met with Suon Phany, 62, dean of the university's Faculty of Odonto-Stomatology, and reached an agreement to conduct academic and exchange programs between the two universities. Hiroshima University will invite Mr. Suon to an international academic society that will gather in November on its campus to conclude the formal signing of the alliance.

"In Cambodia, a large number of dentists were killed in the civil war and only about 30 managed to survive," Mr. Suon responded. "Since the war, we have done our best to foster a new generation of dentists. However, both the number of dentists and the dentistry technology are still insufficient. We look forward to developing the field of dentistry in Cambodia by forming this alliance with Hiroshima University."

Mr. Takata and the two professors are part of a medical support delegation dispatched by Peace Contribution NGOs Hiroshima, a Hiroshima-based non-profit organization. They are holding meetings at Cambodia's Health Ministry on programs for future support as well as conducting dental checkups and oral hygiene demonstrations with Japanese university students at rural elementary schools between September 19 and 23.