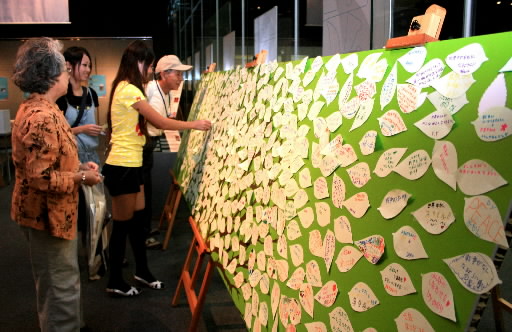 An exhibition on the peace newspaper known as "Peace Seeds" (in Japanese, "Hiroshima Koku") closed on September 23 after running at the Japan Newspaper Museum in the city of Yokohama since the beginning of August. Roughly 8,000 people visited the museum during the 47 days of the exhibition, examined the displays about the peace newspaper produced by Hiroshima teens, and reflected on what they could do to help realize a world without nuclear weapons and war.

The exhibition featured about 250 items, including panels showing the complete Japanese editions of the peace newspaper from the first edition of January 2007 to the 50th edition of May 2009, original illustrated books introduced in the newspaper, and postage stamps from around the world. Video footage on the junior writers covering the Peace Memorial Ceremony in Hiroshima and a video of “Shin-chan no sanrinsha” (“Shin-chan’s Tricycle”), an animated film on the atomic bombing, were also shown at the venue.

Two “world trees,” each 0.9 meters tall and 3.6 meters wide, were filled with peace messages written by visitors. Such messages as “I hope for a world without nuclear weapons” and “World peace” written in various colors were added to the trees. Two world maps were covered with paper cranes, too.

Seiko Takahashi, 75, is a resident of the city of Kawasaki and has been a volunteer at the Japan Newspaper Museum since the end of 2000. He looked back on the exhibition and said, “It was the first time that I saw children touched by an exhibition here. I think many children have grown in their understanding that peace is important and war is wrong."