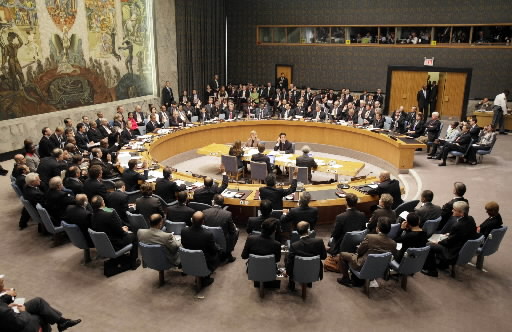 The first United Nations Security Council Summit on nuclear disarmament and non-proliferation was held at UN Headquarters in New York on the morning of September 24 (local time). At the start of the summit, a resolution “to create the conditions for a world without nuclear weapons” was unanimously adopted.

The summit was chaired by U.S. President Barack Obama, who called for the cooperation of nations around the world. He stated that the world is facing a greater risk of nuclear proliferation and he stressed the need for new strategies and new approaches. Prime Minister Yukio Hatoyama attended the summit as the leader of a nonpermanent member.

The newly-adopted resolution was presented by the U.S. to Security Council members in mid-September and was revised in accordance with suggestions from other members. It consists of 24 provisions in the preamble and 29 in the text. The resolution recognizes the Nuclear Non-Proliferation Treaty (NPT) as the cornerstone of the nuclear non-proliferation regime and stresses that nuclear disarmament and the peaceful use of nuclear energy will be pursued. The resolution encourages member nations to cooperate for the success of the 2010 NPT Review Conference.

It also expresses deep concerns with regard to nuclear terrorism and calls for all nations to conclude an additional protocol on International Atomic Energy Agency (IAEA) inspections. It also calls upon all nations to ratify the Comprehensive Test Ban Treaty (CTBT), bringing it into force at an early date. The treaty has been signed but not ratified by the U.S. and China.

The fact that the resolution also welcomes and supports nuclear-weapon-free-zone treaties and such proposals symbolizes the changing attitudes of the nuclear powers. Since the protocols of these treaties limit the transport of nuclear weapons, the nuclear powers have not previously supported them. It is especially significant that the resolution was unanimously adopted by the Security Council, all of whose permanent members are nuclear weapon states.

U.S. President Barack Obama, marking his first appearance as president at the United Nations General Assembly, played a leading role in the adoption of a resolution supporting a nuclear-free world at the UN Security Council Summit. In a speech at the UN General Assembly on September 23, he stressed his efforts in advancing nuclear disarmament and nuclear non-proliferation. His message was as powerful as the speech he made in Prague in April of this year.

The U.S. has also sent a delegation, including Secretary of State Hillary Clinton, to a conference designed to promote ratification of the CTBT, which started on September 24. It is the first such conference the U.S. has attended since its appearance at the initial CTBT conference held in 1999. A member of a U.S. peace organization commented that President Obama is making every effort to create a trend toward nuclear disarmament and non-proliferation based not on unilateralism but on international cooperation.

Mr. Obama is eyeing both the long-term goal of a world without nuclear weapons and the short-term goal of a successful outcome at the NPT Review Conference scheduled for next spring.

The U.S. president’s message is being directed not only to the international society but to the American people as well. Since the nation has not ratified the CTBT, Mr. Obama seems to be hoping that raising public awareness of the issue can help secure support from at least two-thirds of the Senate, the necessary majority for its ratification.

There are many barriers to the president’s vision, including the nuclear ambitions of North Korea and Iran and the belief by some citizens of his own nation in the importance of possessing nuclear arms. Japan, as an only country to have experienced nuclear attack, has been calling for the elimination of nuclear weapons. Japan's new government faces a substantial challenge in determining its actions in this arena.