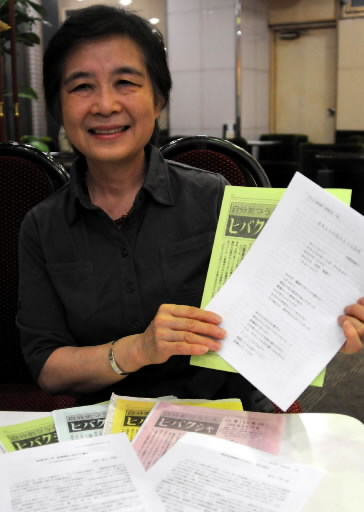 The 200th edition of a booklet titled "Jibunshi Tsushin Hibakusha" ("Life Stories of the A-bomb Survivors") was published in September 2009. The booklets gather the life stories written by A-bomb survivors (hibakusha), including their desire for the elimination of nuclear weapons. Publication of these booklets was begun in February 1993 by Toshie Kurihara, 62, a Tokyo resident. Ms. Kurihara is a former member of the secretariat of the Japan Confederation of A- and H-bomb Sufferers Organizations. Over the past 17 years the booklets have carried contributions from about 600 people, playing a role in conveying the memories of the atomic bombings to future generations.

The 200th edition consists of about 20 pages in B5 size. It contains contributions from four people. The voices of these survivors, whose minds and bodies have been seared with tragedy, resonate strongly with such thoughts:

"Nuclear weapons bring nothing but devastation and utter destruction. The hibakusha have learned this lesson through our own experiences."

“President Obama has expressed his determination to eliminate nuclear weapons, so the United States is changing. It seems the only thing that remains unchanged is the policy pursued by the Japanese government."

Ms. Kurihara retired from her position at the Japan Confederation of A- and H-bomb Sufferers Organizations in 1991. Working as a certified social insurance consultant, she asked fellow survivors to write their life stories "to leave a trace of their own lives." With the cooperation of friends, she has continued to publish the booklet once a month over the years.

"I ask the hibakusha to write not only about their A-bomb experiences, but also about the ups and downs of their lives before the war, too," said Ms. Kurihara. "This approach has stirred the empathy of readers and given life to their experiences."

When publication of the booklet first began, it was sent to less than 20 readers. Today, over 640 people, including some readers overseas, receive the booklet. Approximately 40 percent are A-bomb survivors.

The booklet, however, is facing a challenge. Due to their advancing age, the number of contributors has been declining, year by year. "I hope to expand our approach to the writing. In addition to A-bomb survivors writing their own accounts, I plan to ask young people to listen to their stories and write them down," Ms. Kurihara explained, seeking to develop the booklet as a means of handing down the A-bomb experience.