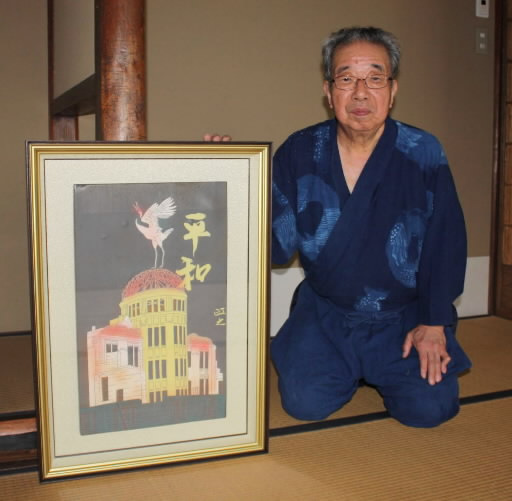 Masayuki Imai, 78, a potter who lives in Kyoto and is a member of the Japan Art Academy, is originally from the town of Takehara, close to Hiroshima City. He has completed a framed picture made of porcelain as a gesture of peace for U.S. President Barack Obama, who is scheduled to visit Japan in November. Mr. Imai was impressed by the president's address in Prague this past April in which he called for the abolition of nuclear weapons. Art cannot be created without peace, Mr. Imai believes, and so he fashioned the picture to express his hope that nuclear arms will be eliminated.

The picture is 75 centimeters high and 54 centimeters wide, and weighs 11 kilograms. Using clay mixed with different colors to form the image, Mr. Imai depicted the A-bomb Dome and a large crane, a symbol of peace, spreading its wings on top. He also engraved the work with the Chinese characters for "peace."

While listening to Mr. Obama's speech, Mr. Imai asked himself what he could do for peace and he decided to create a work of art. To form the picture, he used clay from Higashi Hiroshima City and fired the piece in a special kiln in Takehara that he has used for more than 30 years. He completed the picture in June.

He is a recognized authority on the technique he used to create the piece and has served as a standing director of Nihon Exhibition for some time. At the time of the atomic bombing of Hiroshima, Mr. Imai was working at a factory in Takehara and saw the flash in the sky. "The wounded arrived at Takehara station, one after the other. I was horrified by war," said Mr. Imai, looking back on that day.

Because of this, he was very moved by President Obama's appeal for peace in the world. "The whole world wishes for nuclear weapons to be abolished. By conveying Hiroshima's message through my work, I would like Mr. Obama to feel the importance of nuclear abolition even more strongly," said Mr. Imai. Whether the picture will be given directly to President Obama or delivered through Japan's Ministry of Foreign Affairs or another diplomatic channel has not been decided, but he hopes it will be put on display in the White House.

Mr. Imai has made a second porcelain picture with the same image as the original and this picture was given to Hiroshima Prefecture. It will be exhibited for the public in a number of venues. From October 1 to 7, the picture will be displayed, for the first time, at Fukuya Department Store in downtown Hiroshima.