Nuclear weapons can be eliminated: Prime Minister Hatoyama speaks of "moral responsibility" of the A-bombed nation in UN speech 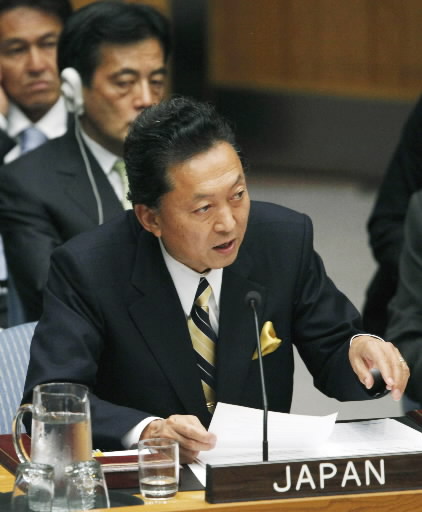 "I would like to encourage all leaders of the world to visit Hiroshima and Nagasaki and absorb with their own eyes and ears the cruelty of nuclear weapons," said Japanese Prime Minister Yukio Hatoyama in a speech at the UN Security Council Summit on Nuclear Non-proliferation and Nuclear Disarmament on the morning of September 24 (local time). It was an epoch-making statement in the sense that the top leader of the A-bombed nation made this request directly on the occasion where the leaders of all nuclear weapon states were present.

Mr. Hatoyama delivered speeches at the Security Council Summit, where a resolution "to create the conditions for a world without nuclear weapons" was adopted, and at the 64th session of the UN General Assembly. He emphasized his intention to support the initiatives that U.S. President Barack Obama has advocated.

On the afternoon of the same day, Foreign Minister Katsuya Okada took part in the Sixth Conference on Facilitating the Entry into Force of the CTBT and pledged Japan's contribution toward the treaty's entry into force. The diplomatic debut of Japan's new administration offered the impression of a change to "leadership by politicians" in the field of nuclear disarmament policy, as in other areas.

In his two speeches, Mr. Hatoyama announced "Japan's firm commitment to the Three Non-Nuclear Principles," and clearly stated that, despite its potential to develop nuclear weapons, Japan has no intention of doing so. He used the expression "moral responsibility…as the only victim of nuclear bombings," and indicated that Japan would not be party to a nuclear arms race in Northeast Asia while taking a strong stance against North Korea's nuclear development.

Mr. Obama's open vow to pursue efforts toward a world without nuclear weapons does not promise the immediate realization of this goal. Along with Russia, the United States itself possesses the largest number of these weapons and U.S. conservatives contend this nuclear capability should be maintained. They base their argument on the theory that if confidence in the U.S. nuclear umbrella on the part of allied nations is shaken, these countries will move to develop their own nuclear weapons.

In New York, Mr. Hatoyama clearly denied the possibility, as his predecessors have, of Japan arming itself with nuclear weapons. This pledge may be helpful in fostering an environment for nuclear disarmament in the United States.

On the other hand, Daryl Kimball, a nuclear expert of the Arms Control Association, pointed out that Japan’s reliance on the threat of a pre-emptive nuclear strike by the United States has been seen as a problem in terms of nuclear weapons reductions inside that nation. "It will depend on how Japan, with its new administration, alters its stance," Mr. Kimball said cautiously.

Previous Japanese administrations asked that the United States guarantee Japan's security under the U.S. nuclear umbrella and took the stance that nuclear weapons were necessary. In his speeches, Mr. Hatoyama did not address this double standard. How does the new government define the "nuclear umbrella" and how might it be dissolved? Along with negotiations between Japan and the United States behind closed doors, a nationwide discussion involving Japanese citizens will be vital.

The public will also be watching the actions of the prime minister in encouraging Mr. Obama's visit to Hiroshima and Nagasaki, which is the desire of the people of the A-bombed cities and the request that Mr. Hatoyama himself made at the beginning of his speech.