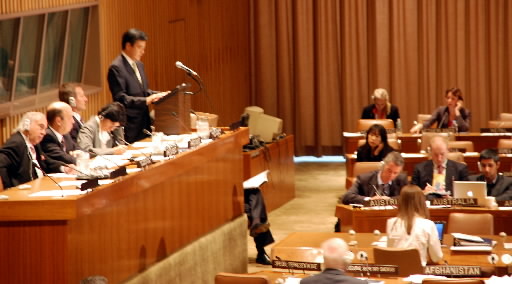 A conference to promote ratification of the Comprehensive Test Ban Treaty (CTBT) closed on the afternoon of September 25 (local time). The two-day conference was held at the United Nations Headquarters in New York.

Representing non-governmental organizations on the second day of the conference, Jessica Mathews, president of the Carnegie Endowment for International Peace, delivered a speech in which she made reference to the nine nations that have not signed or ratified the treaty, and urged them to join the CTBT.

Ms. Mathews criticized China, saying the Chinese government has reported that the CTBT is being considered but has not taken action to win approval from the national legislature. She also urged North Korea to refrain from further nuclear testing and urged the country to promptly return to the six-party talks. She also stated that Middle Eastern nations, India and Pakistan could “substantially ease regional tensions” through ratification of the CTBT.

The CTBT, which bans all nuclear tests with explosions, has been signed by 181 nations and ratified by 150. A conference to promote its ratification has been held every two years since 1999. This year’s conference is the sixth and was attended by 103 nations including the United States and China, which are Annex 2 states but have not ratified the treaty.

India, Pakistan and North Korea, which have not signed the treaty, did not attend the conference.

For two days starting on September 24, which was the thirteenth anniversary of the signing of the Comprehensive Test Ban Treaty, a conference to promote the treaty’s ratification was held at UN Headquarters in New York. Earlier, the U.N. Security Council Summit adopted a resolution calling for all nations to ratify the treaty. The United States has also returned to the conference after 10 years. These factors may serve as a tailwind for the ratification of the treaty. Still, tough hurdles remain.

At the beginning of the conference, UN Secretary-General Ban Ki-Moon stated that the CTBT is essential for realizing a world without nuclear weapons, and expressed his hope that the next conference will be one for celebrating its entry into force.

The former U.S. administration took a cool attitude toward the CTBT. But the Obama administration has made an about-face in the nation’s policy, creating a great change in the global trend. New Japanese Foreign Minister Katsuya Okada, in his debut in world politics, announced the “ratification promotion initiative” featuring measures to ensure momentum toward the treaty’s ratification.

However, the hard reality of the situation dampens this optimism. For the treaty to enter into force, nine states, including North Korea and Iran, must still ratify it.

Among part of the U.S. public, there is entrenched opposition to the CTBT. Though U.S. Secretary of State Hillary Clinton declared that the CTBT is vital to nuclear non-proliferation and disarmament and pronounced that necessary measures will be taken for its ratification by the Senate, an effective means of bringing about a breakthrough appear lacking. The Senate voted to reject the treaty in October 1999, when her husband Bill Clinton was president.

At the same time, the significance of the treaty is certainly growing. The Irish representative said that North Korea’s nuclear testing highlighted its necessity. The times are finally on the side of progress. To benefit from this trend, the international community must act with more unity than ever before.