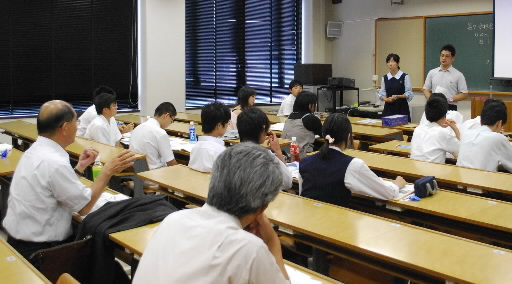 The National Symposium on Peace Education, organized by the Japan Association of Peace Education, was held on September 26-27 at Hiroshima Jogakuin University in Higashi Ward, Hiroshima. Roughly 160 people, including teachers, citizens and students, took part.

Shinichiro Kurose, chair of the board of Hiroshima Jogakuin, delivered a commemorative address titled “Education and Peace.” He shared the school's program in which students of Hiroshima Jogakuin Senior High School learn about monuments in Hiroshima Peace Memorial Park and give tours of the park to visiting students from affiliated schools. He stressed the importance of linking learning with activity.

On the afternoon of September 26, the participants divided into eight subcommittees and examples of peace education activities in schools were exchanged mainly by teachers from elementary school to university.

On September 26, high school students of the No Nuke Network: Students of Hiroshima Against Nuclear Weapons, a group that has launched a campaign to invite U.S. President Barack Obama to Hiroshima, took part in the National Symposium on Peace Education. They reported on their activities at the subcommittee “Youths engaged in peace activities” and exchanged ideas with about 30 people, including teachers and high school students.

Two representatives of the No Nuke Network spoke about their group, saying that their aim is the abolition of nuclear weapons and that they have called on President Obama to visit Hiroshima as they believe the American president is a leader who can help change the world. Showing slides, they reported on the development of their discussions, the things they have learned, and their activities on the street.

A member of the audience expressed the opinion that "President Obama is continuing the war in Afghanistan while advocating a world without nuclear weapons. Do you think that nuclear weapons are wrong but war is acceptable?"

A high school student from the No Nuke Network responded, “I’m aware of the contradiction. But as third-generation A-bomb survivors and youths in Hiroshima, we would first like to do what we can for the cause of nuclear abolition.” Another high school student expressed enthusiasm for expanding such peace activities, saying, "It wasn't until I started taking part in peace activities that I began to look into peace issues myself and think more deeply about peace. We want to offer opportunities for young people who haven't yet shown an interest in peace activities."