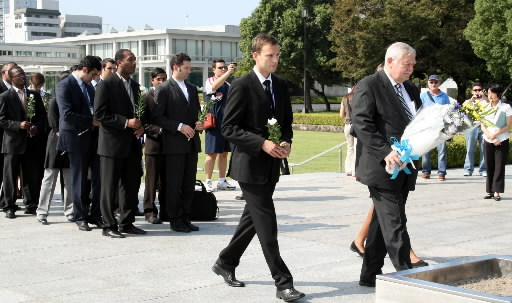 A total of 26 members of the UN Disarmament Fellowship Program, who have been visiting Japan at the invitation of the Japanese Ministry of Foreign Affairs, visited Hiroshima Peace Memorial Park on September 26. The delegation learned about the devastation wrought by the atomic bombing through touring Peace Memorial Museum and other activities.

The members were mostly young diplomats from 25 countries including Russia and other nuclear weapon states. Inside the museum, they paused to look closely at the exhibits, such as a panoramic model which represents the devastation to the city after the bombing and explanatory panels about the aftereffects of radiation. Later, the group offered flowers at the Cenotaph for the A-bomb Victims and listened to the testimony of an A-bomb survivor.

Klemen Polak, 34, at the Permanent Mission of Slovenia to the United Nations, said, "As someone who will be involved in nuclear disarmament in the future, I now feel an even stronger responsibility." Zhao Kun, 29, at the Department of Arms Control and Disarmament at the Ministry of Foreign Affairs of the People's Republic of China, commented, "We should spare no effort in preventing nuclear weapons from being used again."

The U.N. Disarmament Fellowship Program was launched in 1979 with the aim of nurturing disarmament experts. Since 1983, a delegation from the program has visited Hiroshima each year.