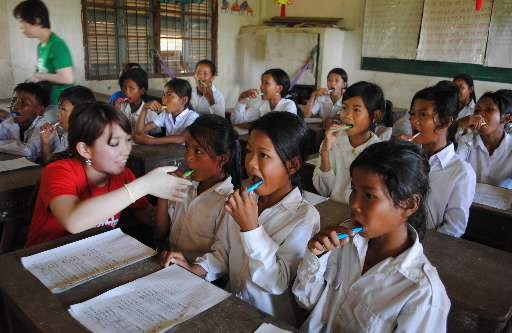 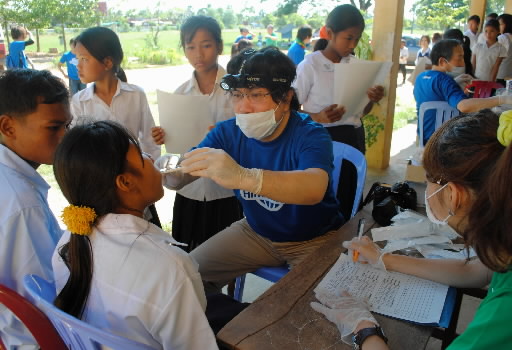 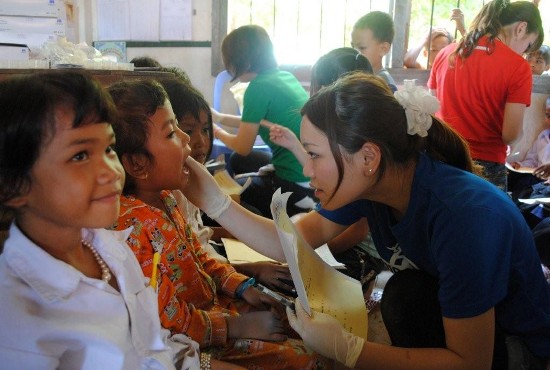 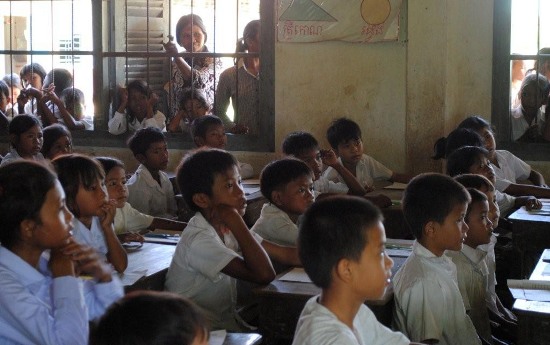 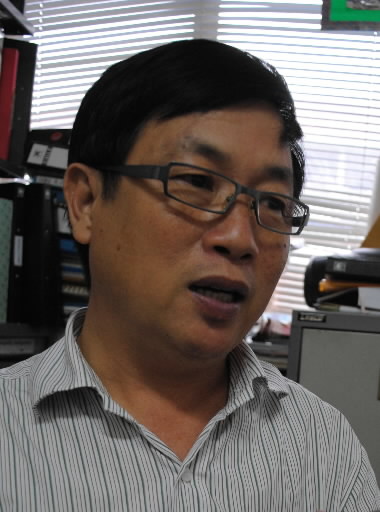 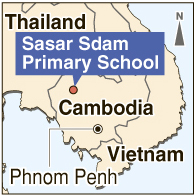 A delegation sent by an NPO called Peace Contribution NGOs Hiroshima offered a two-day dental support program, which was spearheaded by Hiroshima University's School of Dentistry, at a rural primary school in Cambodia on September 21. Following the chaotic period of the 1970s and 1980s, when genocide under the Pol Pot regime and an invasion by Vietnamese forces occurred, even almost 20 years after the end of the civil war, there is still a shortage of dentists in Cambodia. At the same time, education for preventing cavities has not been widely shared. I accompanied the delegation on its mission and in this story report on current dental conditions there.

Sasar Sdam Primary School, where the program was held, is about a 30-minute drive northwest from downtown Siem Reap in an area where the temples of Angkor Wat, a World Heritage site, are scattered. In the dim classroom lacking overhead lights, the eyes of the children sparkled as they held toothbrushes in their hands. Outside the barred windows of the classroom, a crowd of mothers and children were looking on.

"After you eat something, be sure to brush your teeth. Move the toothbrush carefully, up and down, back and forth, a number of times," said Saori Kawano, 20, a junior at the School of Dentistry and others, to the students through an interpreter. The delegation members also presented a picture-story show, where Snow White went to bed without brushing her teeth and discovered the next morning that her mouth was full of cavities.

Nak Van Dy, 12, a sixth grader, said it was the first time she had had a dental checkup and instruction in brushing her teeth. She likes candy and ice cream. "I didn't realize how terrible cavities are. Starting today, I will brush the backside of my teeth," she added.

Yhuem Gar, 40, a mother of four who joined the class with her third daughter, said, "I brush my teeth only once a day when I get up. That's what I learned from my parents and that's what I automatically taught my own children." There is no dental clinic nearby, nor has she ever had a dental checkup.

On the first day of the program, 366 students took part. Katsuyuki Kozai, 53, the director of the School of Dentistry, and six other dentists, along with Japanese university students, conducted the dental checkups for the children. "Some children have six-year molars with cavities, and other children have plaque deposits though they are still in primary school. The condition of children's teeth in Cambodia is very poor," Dr. Kozai, a specialist in pediatric dentistry, said in surprise.

According to Hak Sithan, head of the Oral Health Office (OHO) in Cambodia's Ministry of Health (MoH), only one percent of primary schools in the rural areas of Cambodia are actively teaching their students how to prevent cavities. In November, the OHO is planning to increase its efforts by calling strongly on rural primary schools to teach their students how to brush.

The medical support delegation consists of 45 medical doctors, anesthesiologists and students from Hiroshima University's School of Dentistry and Hiroshima University of Economics. Items such as medical equipment and gloves were donated by the Hiroshima South Rotary Club.

For most university students taking part in the delegation, this is the first volunteer activity they have been involved in overseas. Looking back on her experience, Ms. Kawano, who is studying to be a dental hygienist, said, "I didn't know anything about developing countries except for the information I heard on TV. When I was in Cambodia, the children listened to us very carefully and I felt the work was really rewarding."

"The amount of overseas aid offered by the UN and other organizations isn't sufficient, so we aren't able to provide for teaching oral hygiene," said Dr. Sithan. "I hope the university students from Hiroshima will be involved in this cavity prevention effort not only at Sasar Sdam Primary School but at primary schools in every part of Cambodia over the long term," Dr. Sithan added hopefully.

Doctors and students from Hiroshima are working hard amid Cambodia's sweltering heat. It struck me that every exertion made by every member of the delegation will no doubt contribute to improving the quality of dentistry in Cambodia.

Why is dentistry lagging behind in Cambodia?
Under the Pol Pot regime, a large number of dentists were killed and only about 30 dentists managed to survive. The number of dentists has now increased to about 450, but they are mainly practicing in Phnom Penh, the capital of Cambodia. Overseas medical aid is allocated first for preventive measures involving infectious diseases such as HIV/AIDS and malaria. Dentistry, which is not directly linked to life-threatening diseases, has always been left on the back burner.

What issue is the highest priority?
Poor people in the rural areas are not in the habit of brushing their teeth and have little interest in brushing. This November we will begin teaching midwives working for health centers at 960 sites how to prevent cavities so they can teach young mothers the importance of brushing. The problem is that both the budget and the personnel for the program are limited, and we are not sure how much we can achieve.

What are your hopes with regard to support from Hiroshima?
First of all, ties between Hiroshima University's School of Dentistry and our University of Health Science are very significant. Two universities in Cambodia are training students to be dentists, but they are not well equipped and human resources at these institutions are limited. We hope that Cambodian students, who are studying at the School of Dentistry in Hiroshima, will play a role in improving dentistry and public hygiene back in Cambodia. As for the youth of Hiroshima, I hope their eyes will be opened, and they will understand, the reality of this poor country where the scars of war still linger.