DVDs of A-bomb account are distributed at international conference 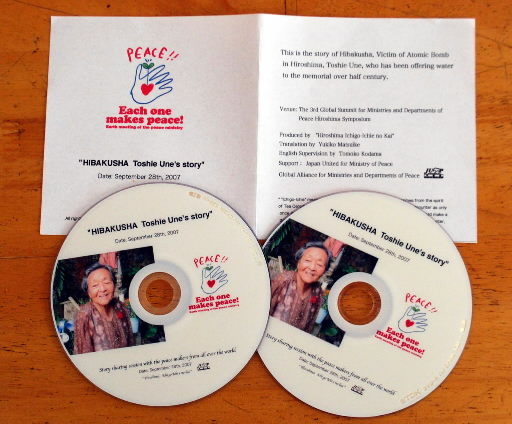 A DVD featuring the account of an A-bomb survivor, with English subtitles, has been completed for distribution. Toshie Une, 91, a resident of Hiroshima and an A-bomb survivor who has continued to dedicate water to monuments for A-bomb victims for more than half a century, originally shared her story at an international conference on peace held in downtown Hiroshima two years ago. A citizens' group called "Ichigo ichie nokai," which produced the DVD, distributed 60 copies to participants at the Global Summit for Ministries and Departments of Peace, held in Costa Rica in September.

Citizens' groups calling for the establishment of peace ministries and departments in various nations gathered to hold the Global Summit for Ministries and Departments of Peace in Hiroshima in 2007. Ms. Une related her experience of the bombing to the participants and talked about why she continued her efforts to dedicate water for the A-bomb victims. "Ichigo ichie nokai" videotaped Ms. Une's speech.

At the request of summit participants in Costa Rica, seeking to share Ms. Une's experience with the world, "Ichigo ichie nokai" translated her talk at the summit in Hiroshima, added English subtitles to the video, and created the one-hour DVD.

"I received a lot of applause when I spoke about my A-bomb experience at the summit," Ms. Une said. "I hope the DVD will convey my thoughts to the world, in my place, since I'm getting old and I can't travel very far." "Ichigo ichie nokai" will send copies of the DVD for a fee, 500 yen per copy plus postage, for those who express interest. Simply fax your request, with contact information and the number of copies desired, to 082-922-0018.