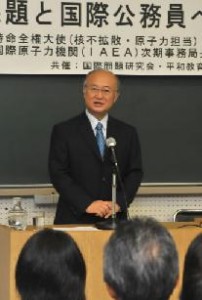 On October 2, Yukiya Amano, 62, who will assume, in December, the post of director general of the International Atomic Energy Agency (IAEA), the so-called "nuclear watchdog," delivered a speech at Kyoto University of Foreign Studies. He stressed his responsibility as the first Japanese director general of the IAEA, saying, "Based on the experience of Hiroshima and Nagasaki, I will seek to oppose nuclear weapons and counter nuclear proliferation."

Expressing his concerns about the nuclear tests that North Korea conducted and Iran's uranium enrichment activities, he noted, "Nothing but dialogue can solve these issues." Regarding North Korea, he described the six-party talks as "a point of light" and placed his hopes on reopening the talks. He also commented, "An inspection by the IAEA, which is internationally neutral, is best," and showed his enthusiasm for IAEA's continuous efforts at verifying the disablement of the nuclear facilities.

He also revealed his idea to promote the use of radiation in treating cancer and other diseases as well as IAEA's contribution to global energy issues through the peaceful use of nuclear energy.

After the lecture, he held a press conference and said, “If invited, I would like to participate in the peace memorial ceremonies that are held in Hiroshima and Nagasaki on the anniversaries of the atomic bombings.”

The lecture, which was organized by Kyoto University of Foreign Studies, was attended by about 300 people, including students and citizens.