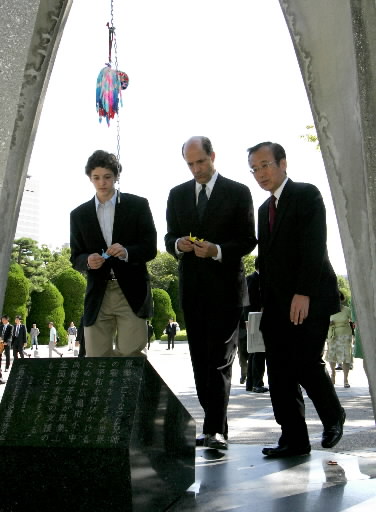 Mr. Roos and his family walked around the park escorted by Hiroshima Mayor Tadatoshi Akiba. In front of the cenotaph, he listened closely and nodded to Mayor Akiba's explanation of the epitaph. At the Children’s Peace Monument, he, together with his son David, offered large and small paper cranes, which symbolized a parent and child.

Following the tour of the park, Mr. Roos visited Peace Memorial Museum. According to Koichiro Maeda, the director of the museum, Mr. Roos carefully read the explanations of the exhibits, such as the panoramic models of the city center both before and after the atomic bombing, some belongings of A-bomb victims, and information about the aftereffects of radiation. After the tour, Mr. Roos stated, "A visit to Hiroshima is a powerful reminder of the destructiveness of nuclear weapons, and underscores the importance of working together to seek the peace and security of a world without them."

Mr. Roos did not give a clear answer to Mayor Akiba on the possibility of a visit to Hiroshima by President Obama, a request the city of Hiroshima has made repeatedly. However, he reportedly said that he would like to convey his experience in Hiroshima to the president. Mayor Akiba commented, “I was able to communicate well with the ambassador. I believe we can have more frank conversations on other occasions in the future."