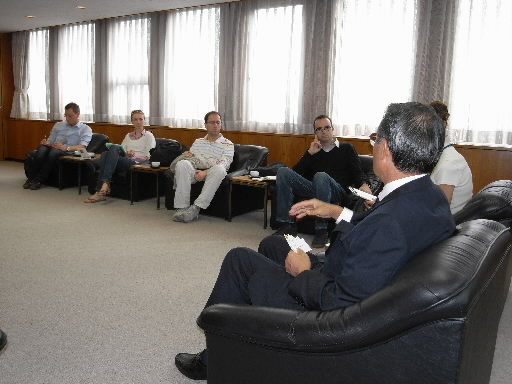 On October 5, four journalists from Europe visited the Chugoku Shimbun in downtown Hiroshima and exchanged ideas with Kazuyuki Kawamoto, president of the Chugoku Shimbun, and Akira Tashiro, executive director of the Hiroshima Peace Media Center, on news coverage of the atomic bombings and peace issues.

The four journalists came to Japan from Germany, Portugal, Italy and Poland invited by the Japan Newspaper Publishers and Editors Association. President Kawamoto shared the perspective of the Chugoku Shimbun, which has been engaged in news reporting with the awareness that the A-bombed city of Hiroshima was both a sufferer of the atomic bombing and a perpetrator of the war. Mr. Tashiro related his experiences of interviewing nuclear-affected sufferers in various nations, saying, "Even local newspapers can publish articles with global messages."

The four journalists asked questions involving how to hand down experiences of war and reconstruction to younger generations. Aleksandra Kaniewaska, 28, a journalist for Dziennik, a newspaper in Poland, who was visiting Hiroshima for the first time, said, "I felt very encouraged by their attitude of reporting the news in pursuit of peace for the future. I want to write articles, too, that are appeals to the world."