North Korea may be ready to return to six-way talks 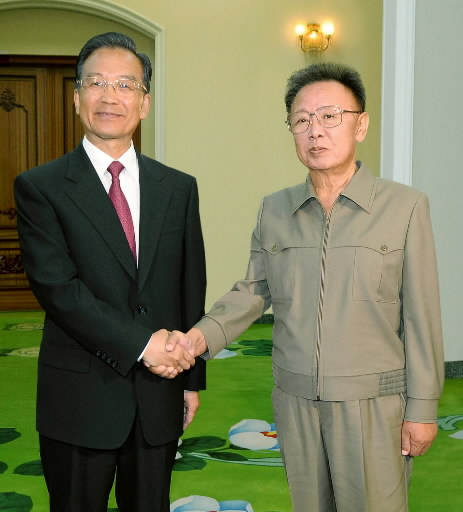 During talks Monday with Chinese Premier Wen Jiabao in Pyongyang, Kim "expressed our readiness to hold multilateral talks, depending on the outcome of the DPRK-U.S. talks. The six-party talks are also included in the multilateral talks," the official Korean Central News Agency said, referring to North Korea by its official name, the Democratic People's Republic of Korea.

"The hostile relations between the DPRK and the United States should be converted into peaceful ties through the bilateral talks without fail," KCNA said.

It was the first time that Kim has referred to the possibility of his country's return to the six-way talks since Pyongyang declared its withdrawal from them in April. But it is not immediately known whether Kim's comments will lead to a resumption of the talks in the near future.

Wen told Kim that Beijing appreciates North Korea's commitment to multilateral dialogue, including the six-party talks involving the two Koreas, the United States, China, Japan and Russia, to realize the goal of a nuclear-free Korean Peninsula, according to China's Xinhua News Agency.

"China is willing to make concerted efforts with the DPRK and other parties concerned to contribute to realizing the denuclearization of the Korean Peninsula and maintaining peace, stability and development in the Northeast Asian region," Wen was quoted as saying.

Regional powers had been closely watching whether Wen, whose country chairs the six-party talks, would be able to convince Kim to return to the multilateral dialogue.

In Washington, U.S. State Department spokesman Ian Kelly said Monday that the United States and its partners in the six-party talks "want North Korea to engage in a dialogue that leads to complete and verifiable denuclearization of the Korean Peninsula through irreversible steps."

"The U.S. remains willing to engage North Korea bilaterally within the framework of the six-party process to convince North Korea to take the path of complete denuclearization," Kelly told reporters.

The United States is conducting close coordination with its allies and partners involved in the six-party talks aimed at achieving the full denuclearization of the Korean Peninsula, he said.

In Tokyo, Chief Cabinet Secretary Hirofumi Hirano said Tuesday that Japan intends to inquire with China as to the meaning of Kim's remarks and ensure close coordination with Beijing and other relevant parties toward resumption of the talks.

"It's important to ask China in a straight manner about the true meaning and to confirm facts about it," Hirano said at a news conference, indicating that policy coordination toward North Korea's nuclear program will be a major topic when Prime Minister Yukio Hatoyama meets Wen and South Korean President Lee Myung Bak for a trilateral summit in Beijing on Saturday.

Kelly said that the United States remains committed to the goal of the September 2005 Joint Statement -- the Verifiable Denuclearization of the Korean Peninsula in a Peaceful Manner.

"There is consensus among the five parties that the verifiable denuclearization of the Korean Peninsula remains the core objective and essential goal of our engagement with North Korea, that the six-party process is the best mechanism for achieving denuclearization," he said.

U.S. officials have said they are awaiting the outcome of Wen's visit before deciding whether to send Stephen Bosworth, special representative for North Korea policy, to Pyongyang to pave the way for North Korea's return to the six-nation forum, according to South Korea's Yonhap News Agency.

Kelly told reporters that "no decisions have been made" about Bosworth's possible trip to the North Korean capital, Yonhap said in a dispatch from Washington.

Wen was on a three-day visit to North Korea through Tuesday, making him the first Chinese premier to visit the country since 1991. His entourage included Foreign Minister Yang Jiechi and Vice Foreign Minister Wu Dawei, who is Beijing's chief nuclear negotiator.

China has sent senior officials to Pyongyang in an effort to bring North Korea back to the six-party process since it began making a series of conciliatory moves toward the United States and South Korea in August after months of tension over its nuclear and missile programs.

In April, North Korea declared its withdrawal from the six-party talks and in May conducted a second nuclear test. Pyongyang said Sept. 4 that it had nearly completed enriching uranium, giving it a new way of developing nuclear weapons in addition to its known plutonium-based program.