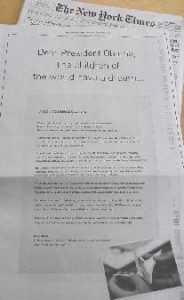 An advocacy ad calling for U.S. President Barack Obama to visit Hiroshima was issued in The New York Times on October 8. The English ad represented the sentiments of the members of the "No Nuke Network: Students of Hiroshima Against Nuclear Weapons," which has been appealing for Mr. Obama's visit. The Hiroshima Prefectural Medical Association, (Shizuteru Usui, president) and the Hiroshima International Cultural Foundation (Nobuko Yamamoto, chairperson), both of which support the students' initiative, bore the expense.

The full-page ad was written in the form of a letter. It read: "We are junior high and high school students in Hiroshima, Japan" and then called for Mr. Obama to see the horrific nature of the atomic bombing firsthand and understand the desire for peace on the part of Hiroshima citizens so that the president can strengthen his determination to eliminate nuclear weapons.

The letter also mentioned the students' activity of collecting more paper cranes than the roughly 23,000 nuclear weapons currently existing in the world. Then it concludes: "It would be a great honor to welcome you to our city and join hands for a peaceful world."

The New York Times has a daily circulation of nearly 1,040,000 copies. The total expense for the advocacy ad, including the production costs, was about 6.5 million yen.

The No Nuke Network: Students of Hiroshima Against Nuclear Weapons, consisting of about 30 junior high and high school students from more than ten schools in Hiroshima, began their campaign this past summer. Tomoko Takamoto, 16, a junior at Jogakuin High School, said, "I am happy that our appeal has directly reached the United States. I expect that President Obama has read our letter, too."

Dear President Obama, the children of the world have a dream…

Because our home is Hiroshima, we understand the importance of peace. We understand how quickly everything you love can be lost forever. Parents, children, relatives, friends, schoolmates, homes, businesses, even dreams themselves.

Recently we formed a group. Our group is called the "No Nuke Network: Students of Hiroshima Against Nuclear Weapons." Our dream is to see nuclear weapons abolished from the world so that children of all nations, and children of generations to come, will never face the horror of a nuclear war.

Mr. President, we know you have the same dream. And we believe your efforts as the leader of the United States can help abolish these awful weapons. We may be young, but we are determined to support you, as many others are around the world, in realizing this dream.

This is why we invite you, very sincerely, to visit Hiroshima one day soon. By seeing firsthand how terrible nuclear weapons truly are, as well as the passion for peace of our citizens, we believe you would be deeply inspired to do everything possible to eliminate these weapons from our earth.

In the meantime, we will be folding paper cranes for you. As you may know, the origami crane is a symbol of peace. Our goal is to fold more paper cranes than the roughly 23,000 nuclear weapons now in the world. We hope the cranes will offer you further inspiration.

Thank you for reading our letter, Mr. President. We do hope you will consider visiting Hiroshima. It would be a great honor to welcome you to our city and join hands for a peaceful world.