Mayors of Hiroshima and Nagasaki announce interest in hosting 2020 Olympics 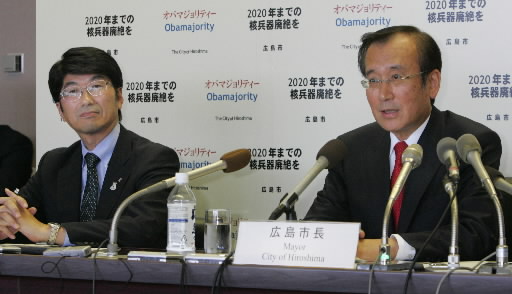 On October 11, Hiroshima Mayor Tadatoshi Akiba and Nagasaki Mayor Tomihisa Taue held a news conference at Hiroshima City Hall and announced that they would soon set up a joint committee for a bid to host the 2020 Summer Olympics. They will highlight the significance of staging the Olympics, a festival of peace, in the two A-bombed cities and explore the possibility of holding the Games in multiple cities, mainly in Hiroshima and Nagasaki. The committee will make a final decision by next spring as to whether the cities will formally declare a bid to host the Games.

Mayors for Peace, for which Mayor Akiba serves as president and Mayor Taue as vice president, aims to "abolish nuclear weapons by 2020." Mayor Akiba stressed, "The Olympic Games would be the ideal global event for commemorating the realization of nuclear abolition." Mayor Taue added, "It is worth the challenge. The challenge itself will accelerate the trend toward nuclear abolition (even if the world is still pursuing this goal at the time)."

The mayors also pointed out that: 1) The cities can speak out about environmental issues since 2020 is also the target year for realizing the "25% reduction of greenhouse gas emissions," which Japanese Prime Minister Yukio Hatoyama has pledged to the world, and 2) the cities can raise the possibility of having multiple cities host the Olympics, despite the tradition of a single large city hosting the Olympic Games.

The cities of Hiroshima and Nagasaki will soon make a request to municipalities located between the two cities, as well as neighboring municipalities, to take part in the joint committee. Mayor Akiba explained that he had already contacted some municipalities unofficially and sensed a receptive mood.

The joint committee will be comprised of the heads of several cities, including Mayor Akiba and Mayor Taue. The committee will discuss such questions as: 1) Will the International Olympic Committee (IOC) approve of multiple cities hosting the Olympics? 2) Will Hiroshima and Nagasaki gain the support of Japan for hosting the Games? and 3) Is it possible to raise sufficient funds to host the Games?

The host city of the 2020 Summer Olympics will be selected at the IOC general meeting to be held in 2013. If several Japanese cities would like to bid for the Games, the Japanese Olympic Committee (JOC) will choose Japan's candidate in 2010. Thus, the cities of Hiroshima and Nagasaki decided to begin serious consideration of the bid now. Mayor Akiba will visit the JOC on October 13 and inform them of the establishment of the joint committee.

Comment: Roadmap to the dream should be shared with citizens
by Hiroki Takigawa, Staff Writer

As Hiroshima Mayor Tadatoshi Akiba and Nagasaki Mayor Tomihisa Taue have admitted, the idea of inviting the 2020 Olympics to the A-bombed cities of Hiroshima and Nagasaki is only at the stage of declaring their "challenge for the dream."

A fair number of citizens have found the announcement by the two cities rather "abrupt." Mayor Akiba has spoken repeatedly of his "dream" of hosting the Olympics in city council sessions and on other occasions. However, he has never discussed such concrete issues as raising funds and holding the Games in several cities with the entities that would be concerned, including local sports organizations, the business community, and the prefectural government.

Reportedly, the cities of Hiroshima and Nagasaki decided to start exploring the possibility because a host city candidate from Japan will be chosen sometime next year. The dramatic change in world opinion on nuclear weapons due to the emergence of U.S. President Barack Obama is also behind this development. Both cities agree that their quest to bid for the Olympics in 2020, which is their target year for completing the elimination of nuclear weapons, will "accelerate the momentum for the abolition of nuclear weapons."

Nonetheless, the realization of this dream will not be easy. Partly because of its investment in the 1994 Asian Games, the city of Hiroshima had to declare a financial emergency in 2003. Mayor Taue has revealed that when he first heard the idea from Mayor Akiba last fall, he felt that "it was simply a dream." He admitted that "there are almost no facilities which could be used for the Olympics in their present state (in Nagasaki)."

Holding the Olympics in several cities by asking other local governments to join Hiroshima and Nagasaki could lead to sharing the financial burden. Tokyo has just lost in the bidding for the 2016 Olympic Games. Can the cities of Hiroshima and Nagasaki overturn the traditional Olympic conventions and become venues for "a festival of peace"? The first hurdle for the cities may be showing their citizens a persuasive roadmap for realizing this dream.