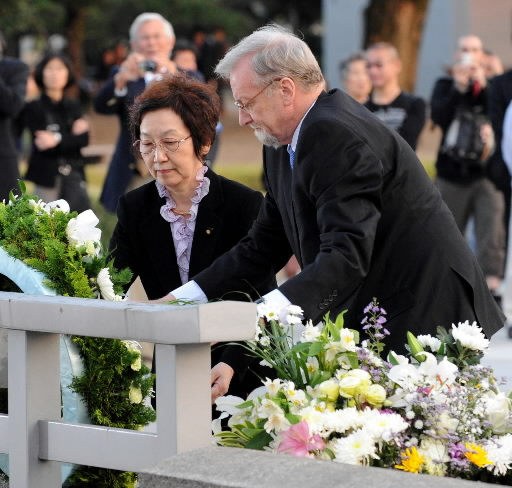 On October 17, the International Commission on Nuclear Non-proliferation and Disarmament (ICNND) began its final meeting in the city of Hiroshima. Members of the ICNND who came to the A-bombed city of Hiroshima offered flowers to the Cenotaph for the A-bomb Victims, made a tour of Hiroshima Peace Memorial Museum, and learned about the reality of the atomic bombing. The ICNND members will hold discussions from October 18-20 and compile, within this year, the final report that will provide a road map toward the abolition of nuclear weapons.

Twenty-six committee members and members of the advisory board from 16 nations, including former Japanese Foreign Minister Yoriko Kawaguchi and former Australian Foreign Minister Gareth Evans, ICNND co-chairs, are attending the meeting in Hiroshima. Most members first took part in the gathering "ICNND-Civil Society Dialogue" held at a hotel in downtown Hiroshima and exchanged ideas with about 40 people, including citizens and representatives of atomic bomb survivors (hibakusha).

At the meeting, Hiroshima Mayor Tadatoshi Akiba argued that the abolition of nuclear weapons by 2020, which Mayors for Peace is appealing for, constitutes "a realistic deadline." A representative of Hiroshima citizens called for the implementation of a nuclear weapons convention, saying, "Nuclear weapons and humankind cannot coexist." Rebecca Johnson, a British disarmament expert, demanded that the ICNND final report include the view that the nuclear powers should swiftly declare a "no first use" policy in regard to their nuclear arsenals.

In response to these remarks, Mr. Evans stated that they would not pursue ends thought overly idealistic, but they did intend to issue both an enthusiastic and realistic report.

The members then offered flowers to the Cenotaph for the A-bomb Victims in Hiroshima Peace Memorial Park, visited Peace Memorial Museum, and listened to the A-bomb experience of Akihiro Takahashi, 78, the museum's former director.

The ICNND will hold discussions from October 18-20 at a hotel in downtown Hiroshima. These talks are based on a draft of the final report which includes the idea that nuclear weapons will be reduced below 1,000 by 2025.

The International Commission on Nuclear Non-proliferation and Disarmament (ICNND)
The ICNND is an expert commission established as a joint initiative of the governments of Japan and Australia. The commission is comprised of 15 members, including former senior government officials from five nuclear powers, such as the United States and China, as well as India and Pakistan, in addition to 28 members of the ICNND advisory board. The ICNND has held seven meetings, including regional meetings, since the meeting in Australia last October. The meeting in Hiroshima is the final one. The ICNND will submit its report to the Nuclear Non-proliferation Treaty Review Conference (NPT) to be held next May.