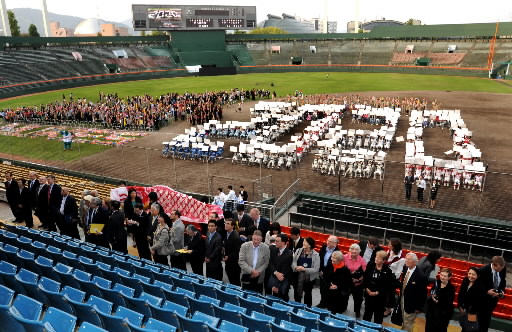 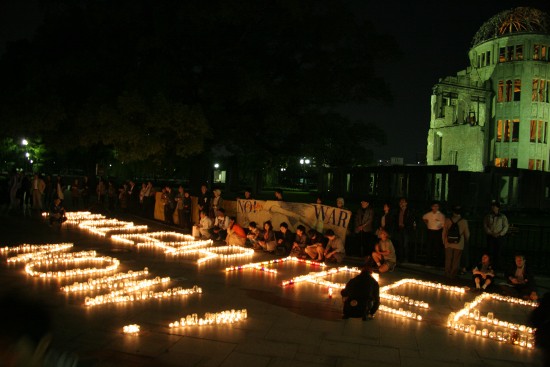 On October 17, with the International Commission on Nuclear Non-proliferation and Disarmament (ICNND) beginning its meeting in Hiroshima, citizens in Hiroshima formed human letters at the old Hiroshima Municipal Stadium in the center of Hiroshima, appealing for nuclear abolition by the year 2020.

About 1,000 people, including parents and their children, who responded to a call by the City of Hiroshima, went to the baseball ground. Lines of elementary school students and others raising white panels, stretching for 17 meters in length and 35 meters in width, formed "2020," appealing to the commission members and members of the advisory board of the ICNND who observed the human letters from the stands above third base.

Mayors for Peace, for which Hiroshima Mayor Tadatoshi Akiba serves as president, has proposed the abolition of nuclear weapons by 2020.

Furthermore, at dusk, citizens created the words “NUCLEAR FREE NOW” in front of the Atomic Bomb Dome by placing candles. There was also the unexpected participation of an ICNND member who happened to pass by the site on the way to the hotel and got off the bus to set out candles with the citizens.