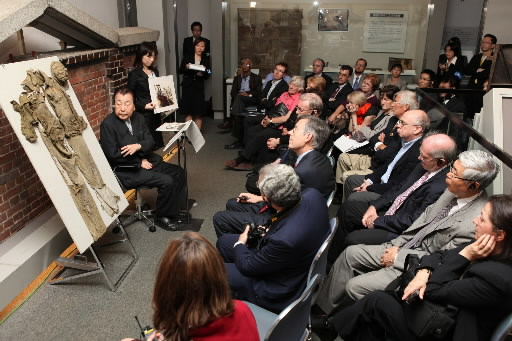 How will the experts of the nuclear panel, from a range of nations, discuss the process of abolishing nuclear weapons after seeing the devastation of Hiroshima's atomic bombing firsthand?

On October 17, when they visited Hiroshima Peace Memorial Museum, the members of the International Commission on Nuclear Non-proliferation and Disarmament (ICNND), charged with discussing issues of nuclear non-proliferation and disarmament, listened to the account of an A-bomb survivor and saw articles left by the victims. The catastrophe that befell the human beings of Hiroshima as a result of a nuclear weapon was surely burned in their minds.

Hiroaki Takahashi, 78, former director of Peace Memorial Museum and a Hiroshima resident, related his experience of the bombing at the museum. Pointing to the tattered clothes of a friend he was with when the bomb exploded, a boy who died one month later, he said in earnest, "I hate the atomic bomb, but hatred cannot erase hatred. I want to appeal for peace with perseverance." Many of the participants nodded, their eyes closed.

The museum displays such items as a panoramic model of the city in ruins, a charred lunch box, a rusty tricycle, and stone steps seared with a human shadow. After an hour-long tour of the museum, guided by Steven Leeper, chairman of the Hiroshima Peace Culture Foundation, the ICNND members shared strong impressions of the experience.

Former Japanese Foreign Minister Yoriko Kawaguchi, co-chair of the ICNND, was tearful. "What we see here is tragic," she said, "but even more tragic is all that was lost without a trace."

Gareth Evans, former Australian foreign minister and the other co-chair, expressed his eagerness for the coming three-day deliberations set to start on October 18. "We intend to draft a final report that carries a strong message," he said. "Bearing in mind both aspects--the pursuit of a world free of nuclear weapons as well as the reality of international politics--we would like to have an ambitious discussion."