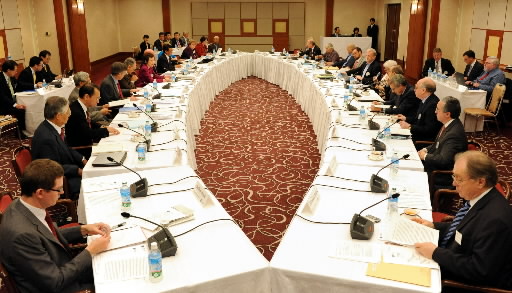 Stress the inhumanity of nuclear weapons

The final meeting of the International Commission of Nuclear Non-proliferation and Disarmament (ICNND) began on October 18 at a hotel in downtown Hiroshima. Substantive discussions are being held over the report scheduled to be compiled possibly by the end of the year. On the previous day, members of the commission listened to the experience of an atomic bomb survivor and learned about the damage caused by the bombs. At today's meeting, some of the participants reportedly voiced the view that the inhumanity of nuclear weapons should be given strong expression in the final report.

Twenty-five members, from 16 countries, took part in today's proceedings, including former senior government officials. At the beginning, Yoriko Kawaguchi, co-chair of the ICNND and former Japanese foreign minister, expressed her wish that the report persuasively explain to citizens what actions should be taken to provide a clearer vision of the ultimate goal. Gareth Evans, the other co-chair and former Australian foreign minister, stressed that the three days of discussion will be key to the outcome of their work.

After their opening remarks, the members held closed-door talks. Reportedly, the draft of the final report will include 20 chapters, of which the first six were discussed on October 18. The main pillars of the report will include the following:
1. Why the report is being issued now
2. The dangers of nuclear weapons
3. Nuclear disarmament, nuclear non-proliferation, and the peaceful use of nuclear power
4. An action plan

After the meeting, Ms. Kawaguchi said the discussion was very productive. The ICNND will hold talks until October 20.