Citizens speak out on nuclear abolition at symposium 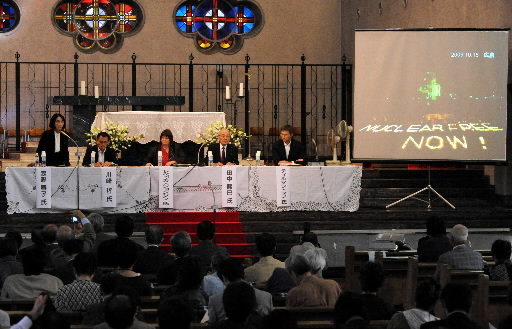 An international symposium was held on October 18 to elicit ideas from the point of view of citizens in regard to realizing a world without nuclear weapons. The symposium held at the Memorial Cathedral for World Peace in downtown Hiroshima was organized by ICNND Japan NGO Network to coincide with the International Commission of Nuclear Non-proliferation and Disarmament (ICNND) meeting in Hiroshima.

A panel discussion was held with four panelists: Akira Kawasaki and Tilman Ruff (Australia), NGO advisors to the ICNND, Terumi Tanaka, secretary-general of the Japan Confederation of A- and H-bomb Sufferers Organizations, and Rebecca Johnson, an expert on nuclear disarmament from the United Kingdom. About 250 people, including experts and citizens, took part in this event.

The four panelists regard the Nuclear Nonproliferation Treaty (NPT) Review Conference scheduled for May 2010 as a milestone, and strongly support reducing the role of nuclear weapons and outlawing them. They also called for prompt international cooperation and local campaigns to appeal for a declaration of "no first use," which would restrict the use of nuclear weapons to a counterattack against a nuclear strike, as well as the early realization of a Nuclear Weapons Convention.

Prior to the discussion, Hiroshima Mayor Tadatoshi Akiba made a speech and suggested that the citizens' report be compiled for the cause of nuclear abolition.