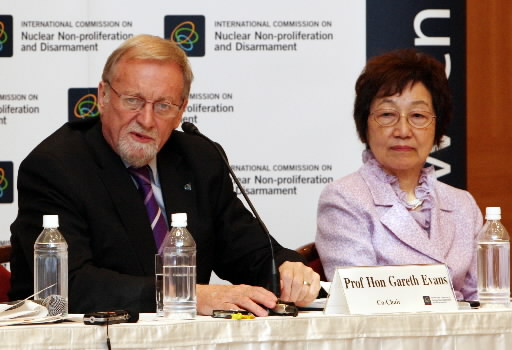 On October 20, the International Commission of Nuclear Non-proliferation and Disarmament (ICNND) closed its meeting at a hotel in downtown Hiroshima after reaching agreement over the contents of the final report. The report, which presents a path toward the elimination of nuclear weapons, will be released early next year. Reportedly, the target number for nuclear arms reductions by 2025 has been compromised from "1,000 or less worldwide," as suggested in the previous draft, to around 2,000. Yoriko Kawaguchi, a co-chair of the ICNND and former Japanese foreign minister, said, "We have agreed on a very ambitious target. I believe we can win the understanding of atomic bomb survivors."

After the meeting, Ms. Kawaguchi commented on the contents of the report, saying, "This is an action-oriented report." She also stressed that the contents are "two steps ahead of governments' policies," pointing out that the report will urge ratification and effectuation of the Comprehensive Test Ban Treaty (CTBT) and call on all nuclear powers to adopt a "no first use" pledge by 2025, clarifying their intention not to use nuclear weapons unless hit by a nuclear strike.

Gareth Evans, the other co-chair of the ICNND and former Australian foreign minister, stated, "There were tough challenges, but we intended to draw up a report that will change the mindset of the world's policy makers."

However, the report fails to specify the target year for total abolition.

The report will be sent to the prime ministers of Australia and Japan, the nations that launched the formation of the ICNND. After taking into account changes in world conditions, the report will be released early next year. It will be submitted to the Nuclear Non-proliferation Treaty (NPT) Review Conference scheduled for May 2010, and governments will be urged to follow its recommendations.

The ICNND has held seven meetings, including regional meetings, since October 2008. The Hiroshima meeting, the eighth and final one, was attended by 26 committee members and members of the ICNND advisory board from 16 countries, including former senior government officials. The meeting started on October 18 and lasted for three days.

It is greatly regrettable that the report did not set a clear deadline for the elimination of nuclear weapons, since I expected the wishes of survivors and citizens would be incorporated. Both technologically and physically, nuclear weapons can be eliminated by 2020. It is essential to set a clear time frame.

Comment: Gap remains between ICNND report and thoughts of the A-bombed city

The International Commission on Nuclear Non-proliferation and Disarmament (ICNND) has determined the contents of its final report after three days of discussion in the A-bombed city of Hiroshima. The report does not indicate a target year for eliminating nuclear weapons and it also took a step backward with regard to the target goal of 2025 for global nuclear reductions. Although this is due to the ICNND prioritizing the idea of feasibility, the resolve to abolish nuclear weapons or the view that rejects nuclear weapons seems undermined. Based on the committee's conclusions, many Hiroshima citizens now question why the final session was held in Hiroshima.

At the press conference held after the meeting concluded, Yoriko Kawaguchi and Gareth Evans, co-chairs of the ICNND, emphasized the "action-oriented" nature and "feasibility" of the report. The co-chairs stated that the ICNND is aiming at "nuclear zero," but it is difficult to understand why they did not clearly indicate a target year, only saying this would occur "after 2025." In particular, a significant gap remains between the conclusions of the ICNND and the thoughts of the A-bombed city, which has been appealing to reach the goal of abolition "as early as possible" or "2020 at the latest."

The line between feasibility and compromise can be very thin. With regard to the target for nuclear arms reductions by the year 2025, the recommendation of "1,000 or less worldwide," as indicated in an earlier draft, has been rolled back to around 2,000. It is said that the familiar clash of interests among the nuclear weapon states, a scene that has played out in similar discussions, was conducted at this meeting as well. Such a scenario seems to weaken the merit of the ICNND, which has been praised as a venue for discussion among prudent individuals who stand outside positions of government.

If governments base their actions on the ICNND report, the support of civil society is essential. In this sense, the fact that the ICNND has pushed back the target year for the "no first use" pledge, which civil organizations around the world have long championed, and regards concluding a nuclear weapons convention as a future challenge, these developments cannot be condoned.

Feasibility has been made a priority, but to ensure that the recommendations being put forth in the report are truly achievable, it is vital to make such efforts as reaching consensus on the report within the international community at the Nuclear Non-proliferation Treaty (NPT) Review Conference slated for next May. If governments do not view the report seriously and undertake step-by-step actions in line with its recommendations, the "feasibility" of the report will have been for naught and hope will turn to disappointment.

Summary of the joint statement by ICNND co-chairs

Below is a summary of the press conference held on October 20 by Yoriko Kawaguchi and Gareth Evans, co-chairs of the ICNND.

Ms. Kawaguchi: After spending time with the citizens and NGO representatives of Hiroshima, I'm determined that there must be no further suffering from nuclear weapons. Our discussions have reached a comprehensive conclusion with a process for getting to zero in regard to nuclear weapons in the world. We can issue our report in a favorable environment, including U.S. President Barack Obama receiving the Nobel Peace Prize for his efforts on behalf of a world without nuclear weapons.

Mr. Evans: There were tough challenges, but we intended to draw up a report that will change the mindset of the world's policy makers. We are proud of the fact that the final 200-page report has been endorsed unanimously. Though it is true that no nuclear weapons have been used since Hiroshima and Nagasaki, this is simply our good fortune.

Question: What is the target number for nuclear arms reductions?

Mr. Evans: The number is very low, but I'm unable to speak beyond that. The number has been agreed upon and it will not change.

Question: Why can't you reveal the number?

Ms. Kawaguchi: The ICNND was launched by agreement between the governments of Japan and Australia. We intend to first convey our conclusions to our prime ministers.

Question: What about the "no first use" pledge?

Mr. Evans: Declaration of the "no first use" policy by all nuclear weapon states is an essential step to achieving nuclear abolition. We have set the target year for this at 2025, but we hope it is realized in an earlier year.

Mr. Evans: We hope to see a world without nuclear weapons as early as possible, even tomorrow. We have met A-bomb survivors and we have a strong desire to realize nuclear abolition. Hope alone, though, will not bring about this goal. I am convinced that people will understand our intentions once they read our report.