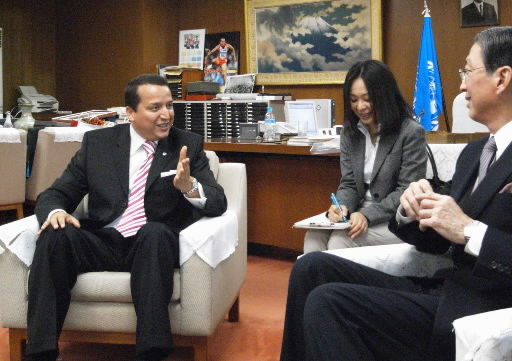 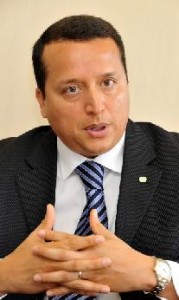 Alexander Mejia, 42, the new director of the UNITAR Hiroshima Office, visited Hiroshima Governor Yuzan Fujita at the Hiroshima Prefectural Government on October 21, marking the first meeting between the two.

Mr. Mejia expressed his gratitude to the prefectural government for their support of the "UNITAR Hiroshima Fellowship for Afghanistan" and other projects. Mr. Fujita responded, "We will continue to support UNITAR as much as we can."

Following the meeting with the governor, Mr. Mejia held a press conference and announced that UNITAR will launch new programs with the themes of corporate social responsibility and environmental issues, such as global warming and sustainable energy sources, starting in the next year. He emphasized, "Hiroshima has a wealth of knowledge on various issues including peace and security. I want to implement programs which will make the best use of our location in Hiroshima.”

The new director of the UNITAR Hiroshima Office, Alexander Mejia, 42, is from Ecuador and this is the first time he has been to Hiroshima. He mentioned the glow of sunset on the Seto Inland Sea, a sight that eased his mind soon after assuming office. Mr. Mejia is grateful for the ideal location of the UNITAR office close to Hiroshima Peace Memorial Park. "Hiroshima was able to overcome its suffering and choose the path of peace, rather than the path of revenge," he said. "We can learn a lot from this city about post-conflict reconstruction."

One project that UNITAR has been implementing is the "UNITAR Hiroshima Fellowship for Afghanistan," which provides training in Hiroshima for Afghan government officials and others. Mr. Mejia hopes that this unique support program for reconstruction, which "only Hiroshima can offer," will be extended to Iraq.

Because of the beautiful nature of Hiroshima, Mr. Mejia is also considering new environmental programs. "Hiroshima is home to many companies with a high degree of expertise," he explained. "Perhaps environmental experts from various countries could be invited to Hiroshima to hold seminars." He added, many ideas evidently in mind: "I would like Hiroshima to be a center of knowledge."

Mr. Mejia's background includes stints as a diplomat and vice minister of the economy in Ecuador as well as a board member of the World Bank. Looking back on his career, he said, "One person can't do much. Team work is important for any kind of job." Having lived in five countries, including the United States, he would like to strengthen UNITAR's solidarity with the local community. Toward this end, he is discussing the possibility of holding a panel exhibition to introduce the activities of the United Nations and UNITAR, and providing lectures at universities and high schools. "I would like to expand our partnership with the prefectural and city governments, as well as the private sector and academia," noted Mr. Mejia.

According to Mr. Mejia, more than 60 people applied for the UNITAR director position through an open recruitment process. "Hiroshima is the city that I had most wanted to visit in the world," he said. "It's because this city has left a legacy of building a positive future from its past."

His wife and children will soon join him in Hiroshima. He hopes that his three daughters, ages 11, 10 and 3, will learn from their experience of the city that the mistakes of history must not be repeated.