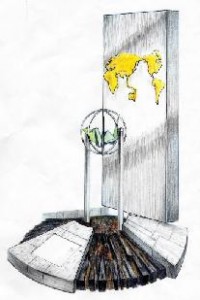 Former students who attended Koi Elementary School in Nishi Ward, Hiroshima at the time of the atomic bombing are pursuing a project to raise a monument for A-bomb victims. The monument will incorporate A-bombed bricks and glass and will stand in the school yard of the elementary school. The former students are calling on the public to contribute A-bombed materials, saying, "We hope a wide range of people, not just alumni of the school, will get involved in the project in order to console the spirits of the unknown dead who were cremated here."

The monument is expected to be completed next summer. Hiroaki Wakayama, dean of the Faculty of Art of Hiroshima City University, designed the memorial.

The design features the form of a paper crane above the city of Hiroshima after the atomic bombing. This crane, made of copper, will be displayed at a height of 1.5 meters and hover over a ground laid with marble stones that were used in the old Hiroshima City Hall and exposed to the heat of the bombing. The inscription on the monument will be written by Kaneto Shindo, a Hiroshima-born film director, and consist of the word "Inori" (prayer).

A-bombed materials offered to the school will be placed and mortared between the marble stones to serve as part of the pedestal. These materials are expected to be A-bombed bricks, concrete, or glass bottles of up to about 20 centimeters on each side. The names of the contributors will be stored in a time capsule placed behind the monument.

Koi Elementary School served as a first-aid station in the aftermath of the atomic bombing. Four years after the bombing, the remains of 2,000 people were excavated from the school yard. These remains are now stored in the Atomic Bomb Memorial Mound in Hiroshima Peace Memorial Park. Hiroshi Yuzaki, 75, a resident of Nishi Ward and one of the facilitators of the project, called for cooperation, saying, "We would like to communicate to future generations the bitter regret of those who passed away without even family members by their side and convey our heartfelt wish for peace in the world." Please call Renshoji Temple at 082-271-4641 for further information.