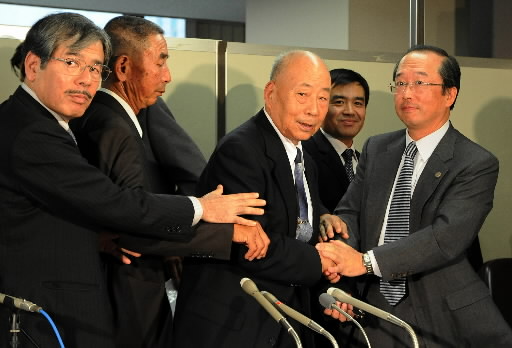 A lawsuit filed by five Chinese citizens against Nishimatsu Construction Company, based in Tokyo, has resulted in an apology and settlement by the firm. The plaintiffs, which included former forced laborers, had been seeking a total of 27.5 million yen in damages for the labor imposed at the Yasuno Power Plant construction site in Akiota, Hiroshima during World War II. On October 23, the Nishimatsu Construction Company apologized for the fact that 360 Chinese citizens had been brought to Japan by force and established a fund of 250 million yen to award damages.

In 2007, the Supreme Court denied the plaintiffs' demand. The company, however, did take note of the court's opinion, which stated that "the victims endured extreme suffering, and those who were involved in imposing this forced labor, including Nishimatsu Construction Company, should make efforts to provide relief to the victims." Nishimatsu Construction Company took the case to the Tokyo Summary Court under the summary settlement procedure and the plaintiffs then reached an agreement with the company. It is highly unusual for a company, having won in court and unburdened by any legal obligation to offer reparations, to voluntarily pursue financial compensation for the victims.

According to the terms of the settlement, Nishimatsu Construction Company admitted to bringing Chinese citizens to Japan by force, and apologized for this action. It has also entrusted the Japan Civil Liberties Union (JCLU), an NGO, with 250 million yen to handle compensation for the 360 forced laborers, the costs involved in searching for the former workers whose whereabouts are unknown, and the expense of raising a monument at the former construction site. The trust for reparations and other disbursement will be known as the "Nishimatsu Yasuno Friendship Fund."

In the plaintiffs' first trial at the Hiroshima District Court, their lawsuit was dismissed due to such reasons as the fact that the period for demanding compensation had already expired. The Hiroshima High Court then ruled that the statute of limitations should not be applied in this case, thus scrapping the district court decision. But the Supreme Court, in its first judgment, overturned the verdict of the high court by declaring that "the 1972 Japan-China Joint Communiqué denies Chinese citizens the right to demand compensation."

Nishimatsu Construction Company had been seeking to settle the case with the plaintiffs as part of its efforts to resolve difficulties faced by the company in the wake of a political fund scandal earlier this year. Nishimatsu is accused of funneling money to politicians through dummy organizations, a violation of the Political Funds Control Law. The company is also planning to settle a lawsuit over forced wartime labor in Niigata Prefecture.

On the day of the settlement, three of the five Chinese plaintiffs visited Japan. They issued a statement, saying, "We appreciate Nishimatsu Construction Company's proactive attitude. This action had laid the foundation for settling similar cases."

The decision by Nishimatsu Construction Company to voluntarily pay compensation to former forced laborers from China, in spite of a Supreme Court ruling that had absolved the company of any obligation to provide redress, has given new impetus for resolving other post-war lawsuits involving reparations. It is thought that Nishimatsu's action will have an impact on pending cases that have been unable to reach a resolution due to the statute of limitations and intergovernmental post-war agreements.

To date, 15 such lawsuits have been filed in Japan by former forced laborers from China, and half of these are still pending. In addition to the statute of limitations, the Supreme Court ruled in 2007 in the case involving Nishimatsu Construction Company that "the 1972 Japan-China Joint Communiqué denies Chinese citizens the right to demand compensation." Though the court, in an unusual move, expressed hope that efforts would be made to provide relief to the plaintiffs for their suffering, the ruling virtually closed the door to providing judicial relief to the wartime victims.

As a result of the political fund scandal, Nishimatsu Construction Company had a vested interest in changing its image and restoring the trust of the public. Still, the fact that the company, which had won the lawsuit, agreed to pay 250 million yen in damages is highly significant.

"As a test case involving an out-of-court settlement, the company's action will likely have an impact on other companies accused of such wartime behavior," said Hiroshi Tanaka, professor emeritus of the History of Japan-Asia Relations at Hitotsubashi University. "When the government and companies face such lawsuits, the government has tended to reject the idea of reaching a settlement. The government, though, should make a political decision in favor of settlements," stressed Professor Tanaka.

The new Japanese administration cites the nation's relationship with East Asian countries as a top priority. It should exercise leadership in providing relief to the forced laborers from World War II by acknowledging the reality that these victims are growing older, year by year, and that the court cases are generally prolonged affairs.


History of the lawsuit against Nishimatsu Construction Company

1944: 360 Chinese, including the plaintiffs, are brought to the Yasuno Power Plant construction site by force.
1945: The forced laborers, including the plaintiffs, return to China.
September 1972: The Japan-China Joint Communiqué is signed.
January 1998: Former forced laborers and relatives of the deceased laborers file a lawsuit against Nishimatsu Construction Company at the Hiroshima District Court.
July 2002: The Hiroshima District Court rules that "Chinese laborers have lost their right to claim wartime compensation" for such reasons as the statute of limitations. The plaintiffs lodge an appeal with the Hiroshima High Court.
July 2004: The Hiroshima High Court rejects the Hiroshima District Court ruling, saying "applying a statute of limitations in this case is an abuse of power." Nishimatsu Construction Company appeals the high court judgment.
April 2007: In its initial decision, the Supreme Court rules that the Japan-China Joint Communiqué denies Chinese citizens the right to demand compensation. The plaintiffs lose the lawsuit.
October 23, 2009: Nishimatsu Construction Company and the plaintiffs take the matter to the Tokyo Summary Court under the summary settlement procedure and an agreement is reached between them.

Bringing Chinese citizens to Japan by force
Industries such as coal and construction pushed for Chinese laborers to be transferred to Japan in order to address Japanese shortages in the workforce. According to records of the Ministry of Foreign Affairs of Japan, the former Japanese Imperial Army brought 38,935 Chinese from North China and other areas of China to Japan by force and compelled them to work at 135 sites in Japan including coal mines and construction sites. Among those brought to Japan, 6,830 died from the harsh working conditions. In the 1990s, former forced laborers from China filed lawsuits against Japan and Japanese companies one after another, seeking compensation.

Summary settlement
This is a settlement that can be reached at the Summary Court without holding a new trial for the case in the form of a civil lawsuit. One party lodges a claim summary and cause in writing or orally at the court, and both parties come before the court on the settlement day. When both sides reach an agreement, it is recorded in the settlement document. The document has the same effect as a court ruling. This is also known as a "lawsuit prevention settlement" since it is pursued to avoid a lawsuit.