Hiroshima survivor speaks out at photo poster exhibit in N.Y. 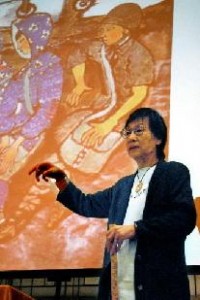 Emiko Okada, a survivor of the atomic bombing of Hiroshima during the closing days of World War II, spoke to New Yorkers about her experiences at a photo poster exhibit that kicked off Monday.

As a hibakusha atomic bomb survivor, Okada came to New York to share her story in the hopes of educating Americans about the devastation that was wrecked on her city and its citizens.

''I think we have to transcend nationality and become citizens of the planet,'' the 72-year-old told an audience of about 60 who gathered at the Japanese American United Church in New York.

She also explained how her work had been buoyed by U.S. President Barack Obama's pledge to create a nuclear-free world, for which he has received the 2009 Nobel Peace Prize.

It has also given her and other atomic bomb survivors the courage to go on working to educate the world and to impart their knowledge on the younger generations, many of whom are not aware of what transpired more than 64 years ago.

''We feel we have been given courage by him saying that,'' she noted.

Okada attended the event along with Steven Leeper, the first foreign chairperson of the Hiroshima Peace Culture Foundation, on the sidelines of the annual meeting of the First Committee at the U.N. General Assembly.

That committee is charged with handling disarmament issues and is expected Wednesday to pass a resolution calling for the elimination of nuclear weapons with a record 72 co-sponsors so far. Although the resolution has been put forward by Japan annually for 15 years, it is the first time that the United States is expected to vote in support of it in nine years.

Okada's appearance is also part of Project 101, which began in 2007 with the aim of taking the photo poster exhibit to 101 cities in the 50 states.

So far the exhibition has traveled to 48 states.

Okada, who wore a necklace made with a paper crane image on it, a symbol of the Japanese-inspired peace movement, and an ''Obamajority'' T-shirt, recalled how large American airplanes flew across a vivid blue sky from the northeast on Aug. 6, 1945.

Because so many American planes had flown overhead in the days before the bombing, the air raid sirens had been called off that morning. So upon hearing the planes her two younger brothers came out to wave, thinking they were Japanese fighters instead.

The 8-year-old was only 2.8 kilometers from the hypocenter when the device went off and did not recall much after the flash except being lifted and falling heavily onto the ground.

Although her mother was bloodied by the shards of glass that had blown into her body, she managed to gather up her three children and head for safety.

Okada's older sister, who had been called in to work at a spot about 300 meters from ground zero, never returned, despite her mother's repeated attempts to go into the city and look for her daily.

In all, Okada said 70,000 people died instantly in the heat and fires that enveloped the city and another 70,000 died from the radioactive fallout by the end of the year. About 4,000 are added to the roster of victims each year as they continue to die from illnesses stemming from their exposure.

In addition to describing the horrific images of the swollen, bloated and burned bodies of children and people in the immediate aftermath, she said the suffering continued as people dealt with the disfiguration, scarring and infections that followed.

While Okada did not suffer any outward physical effects, she threw up continuously after the blast. Later she began to lose her hair, had bloody gums and was lethargic for a long period of time.

''The people who lived had to suffer a kind of living hell,'' she explained.

On top of remembering the horrific scenes that day, she was also struck by the large number of orphaned children who made their way back into the city.

In the rubble that remained, they pathetically called out for their relatives and many were too young to understand what had happened.

''I can never forget them, the children who were wondering,'' she recalled.

At the end of her presentation she handed out about 60 gold paper cranes that she had made from American candy wrappers.

Since 1999, Okada has volunteered as a guide at the Hiroshima Peace Memorial and Museum and beginning in 2000 began to tell her atomic-bomb story to visitors there. Increasingly there are larger groups of Asian visitors, including from China and Korea, she said, but her message is the same to all.

''There is no number of nuclear warheads that will bring peace to the world,'' she noted. ''I feel that you and I and everyone who cares needs to raise our voices.''

Leeper stressed the sense of urgency in dealing with the current situation with the existence of the potentially deadly nuclear weapons.

''All of this is coming from a sense of crisis,'' he said, describing the importance of the next several years in trying to stem the tide of the proliferation of the nuclear weapons.

Although he is optimistic about Obama's positive strides, he is worried about the outcome of the upcoming Nuclear Non-Proliferation Treaty, which is up for review in 2010. He is also planning a conference to take place in Hiroshima in August next year. The format of that meeting will greatly depend on the progress that is made or not made at the United Nations.

If adequate steps are not taken, he and others are considering action that could be taken outside the international body at the city level through organizations such as Mayors for Peace.

But he also advocates for Japan, which is the only country to have suffered from two nuclear bombs, to take a stronger lead on the issue.

''Japan needs to stand up and say get rid of nuclear weapons to the United States,'' he added.

As co-founder and co-organizer of the New York Peace Film Festival, Yumi Tanaka hopes that the 30 posters -- which are based on photos of exhibits at the Hiroshima museum -- will give New Yorkers a chance to learn more about both the Hiroshima and Nagasaki bombings.

''Nothing will happen if you just sit back and do nothing,'' Tanaka told Kyodo News. ''I want people to think about what they can do.''

She made the point that ordinary citizens can band together at the grassroots level to help rid the world of destructive weapons and expects that the exhibit and Okada's story will inspire them to do so.

''How do we get to a world without nuclear weapons? You just have to ask,'' she explained.

Several in the audience were moved by Okada's story, as well as the new information she provided -- including on the American prisoners of war and the Chinese and Koreans who were in the city that day as well.

Tony Armstrong was unaware of the many non-Japanese casualties, which piqued his interest, but was equally intrigued with her own personal story. ''It is an important topic and if people were more aware there would be more action in doing away with these things,'' the technician said.

The free exhibit also includes copies of drawings made by survivors and is on display in the church's basement through Nov. 8. Poetry readings will be held on weekends and there are also tables set up to make paper cranes, which have come to symbolize the Japanese-inspired peace movement.

A film that follows more than 100 atomic bomb survivors as they travel around the world on the ''Peace Boat'' premiered at U.N. headquarters Monday.

Directed by Costa Rica's Erika Bagnarello, the film, ''FLASHES OF HOPE: Hibakusha Traveling the World,'' captured the voices of 103 victims of the atomic bombs dropped on Hiroshima and Nagasaki during World War II.

The 62-minute documentary filmed the atomic bomb survivors' four-month global journey aboard the vessel of Japan-based nongovernmental organization Peace Boat, which visited a total of 23 ports in 20 countries from Sept. 7, 2008 to Jan. 13, 2009.

The voyage was meant for the atomic bomb survivors -- called ''hibakusha'' in Japanese -- to pass along their stories, memories, suffering and hope for the future through interaction with people they met at each stop, such as activists, politicians and ordinary citizens.

''The time is ripe because of the U.S. administration,'' Akira Kawasaki, the coordinator of the Peace Boat project, told an audience after the premiere. He was referring to U.S. President Barack Obama's call for a nuclear free world, which earned him the Nobel Peace Prize for 2009.

''We are trying to use this momentum and this film as a good educational tool,'' Kawasaki said.

Among the highlights of the journey was the hibakusha's meeting with children and other victims of Agent Orange, used heavily during the Vietnam War as a herbicide, during their port call to Da Nang, Vietnam.

The group also met with Tahitians who were victims of French nuclear testing on atolls for about 30 years until 1996, and with Australian aborigines involved in mining uranium.

The film includes scenes from the Japanese antiwar animated movie ''Barefoot Gen,'' which portrays the life of a boy who survives the atomic bombing of Hiroshima in 1945.

Every year, the Peace Boat project charters a passenger ship to provide its passengers with the opportunity to interact with people from around the world to discuss international problems.

On the 25th anniversary of the project in 2008, Peace Boat decided to undertake the project as a way of sharing the hibakusha's stories.

Among the survivors' stories woven into the film is that of Setsuko Thurlow, who lost eight family members on Aug. 6, 1945.

As a central and charismatic figure, Thurlow insists in the film that it is her moral responsibility to educate herself and others to make a stand for the total elimination of the nuclear devices.

''I have the moral responsibility to communicate that to the rest of the world,'' she said. ''I think we have a massive collection of voices and they cannot ignore us.''

Director Bagnarello attended the premiere at the First Committee of the General Assembly, which is in charge of dealing with disarmament issues.

''It was a one-year-long process till now and the purpose of the film was pretty much to tell the story of the hibakusha,'' she said.

Saul Weisleder, a consultant with the International Peace Institute, who watched the film, said, ''The message is very powerful and very well-presented because it conveys the message it wants.''