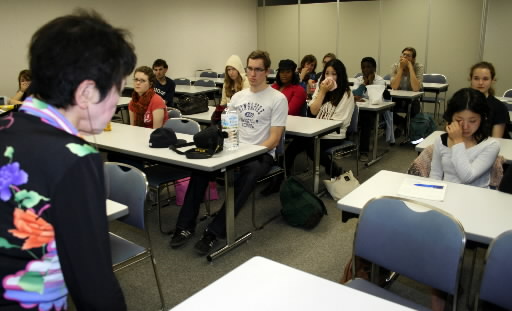 On October 31, 16 American students studying at Doshisha University in Kyoto visited Hiroshima Peace Memorial Park to learn about the damage wrought by the atomic bombing.

After touring Peace Memorial Museum, the students listened carefully as Miyoko Matsubara, 77, recounted her A-bomb experience in English. Ms. Matsubara, a Hiroshima resident, encountered the bombing at the age of 12. Following her account, which included such incidents as losing her friends in the blast and wandering through the city amid the many wounded, one of the students asked if she could forgive the United States for causing such terrible suffering. Ms. Matsubara, answering with a smile, told of receiving treatment for her keloids in the United States. "The Americans also helped me," she said. "I want to love everyone, so I've gotten rid of my feelings of bitterness."

The students arrived in Japan in September and will stay in Japan until next May to study Japanese language and culture. Kimbia Arno, 19, a junior at Pomona College in California, was close to tears. "Imagining what it was like back then brought tears to my eyes," she said. "As an American, I feel responsible for what happened here."