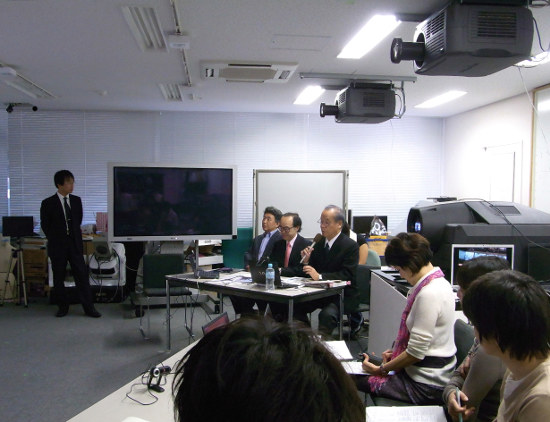 The appearance of the former Hiroshima Prefectural Industrial Promotion Hall (now, the A-bomb Dome) in downtown Hiroshima, as it looked just prior to the atomic bombing, will be restored by a joint effort of universities in Japan and the United States through the use of computer animation. The hall suffered devastating damage in the hypocenter area of the atomic bombing. From the U.S. side, the USC School of Cinematic Arts (the University of Southern California), which sends its alumni to the film industry in Hollywood, will cooperate on the project. The project will produce an elaborate depiction of the hall, including the inside of the building.

Masaaki Tanabe, 71, a Hiroshima resident and president of a film production company now engaged in a related project to restore the appearance of the former Nakajima District (now, Hiroshima Peace Memorial Park) through computer animation, realized this joint effort by calling on the United States for its cooperation.

Professor Richard Weinberg and others at USC will depict the exterior of the Hiroshima Prefectural Industrial Promotion Hall, while a group led by Professor Takeshi Nakagawa at the Faculty of Science and Engineering of Waseda University will work on the inside of the hall and the surrounding area. Another group led by Professor Michitaka Hirose at the Graduate School of the University of Tokyo will be in charge of processing images and establishing a virtual-reality system. About 30 people from Japan and the United States, including researchers and graduate students, will be involved in this effort to restore the appearance of the hall with the latest technology. Even the deterioration of the building, due to aging, will be faithfully restored.

Via videoconference, the members of the project in Japan and the United States have been able to exchange ideas with each other and confer about their future plans.

Mr. Tanabe's vision involves restoring the appearance of the former Nakajima District in a computer-animated film of about 60 minutes in length. The Hiroshima Prefectural Industrial Promotion Hall will appear as a central element of this film. Mr. Tanabe has already begun interviewing people connected to the district for their testimonies. He aims to complete a shorter version of the 60-minute film by next spring, with a running time of about 30 minutes, to show at the Nuclear Non-proliferation Treaty (NPT) Review Conference to be held next May in New York. He also plans to offer this film to U.S. President Barack Obama.

Mr. Tanabe expressed his hopes for the effort, saying, "Young people, who will bear responsibility for international peace in the future, are engaged in this project. It's a project of great significance."

Related articles
Former residents around hypocenter share life before the bombing for computer animation project (July 28, 2009)
Obliterated by the bombing, a neighborhood is reborn (Jan. 3, 2008)