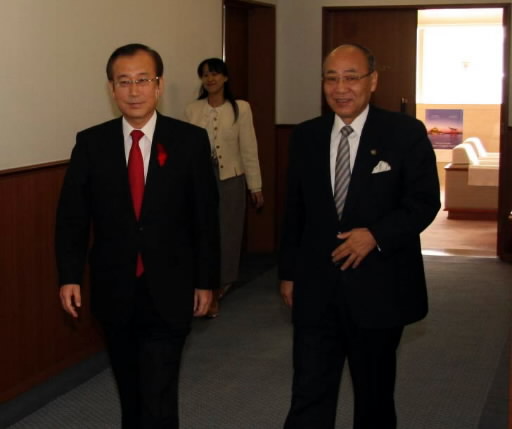 In connection with a possible bid for the 2020 Summer Olympics contemplated by the cities of Hiroshima and Nagasaki, Hiroshima Mayor Tadatoshi Akiba visited Hatsukaichi Mayor Katsuhiro Shinno on November 5 and invited the nearby City of Hatsukaichi to join the 2020 Olympics Bid Review Committee. Mayor Shinno described holding the Olympics in the A-bombed cities of Hiroshima and Nagasaki as "significant" and reacted positively in regard to his city's participation in the committee.

This is the first time that the City of Hiroshima, which is seeking to stage the Games in multiple cities, has called on a local government in Hiroshima Prefecture to join the 2020 Olympics Bid Review Committee.

The mayors held private talks in the reception room of the Hatsukaichi mayor in Hatsukaichi City Hall. After the meeting, Mayor Shinno said, "Hatsukaichi City has the third-largest population of atomic bomb survivors after the cities of Hiroshima and Nagasaki. Staging the Games under the banner of 'peace' would be very significant. Now that we have received a formal request to take part, we will assume a positive attitude as we consider our participation in the committee."

Mayor Akiba emphasized that he sensed favorable signs from the meeting, saying, "The City of Hatsukaichi has addressed peace issues enthusiastically and now understands the purpose of holding the Olympics in the A-bombed cities." The City of Hiroshima plans to continue calling on neighboring governments to join or lend their support to the 2020 Olympics Bid Review Committee.