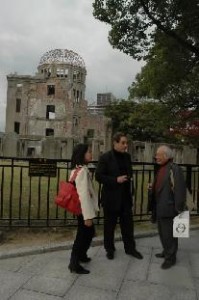 On November 5, Gustavo Araoz, president of the International Council on Monuments and Sites (ICOMOS), which examines candidate sites for World Heritage recognition, visited Hiroshima Peace Memorial Park in downtown Hiroshima for the first time. Mr. Araoz called the park "a significant site for humanity," yet added: "The tall buildings in the neighborhood are undermining the park as a place where people can reflect quietly about peace."

Mr. Araoz, guided by Masaru Maeno, chair of the Japan ICOMOS National Committee, toured the World Heritage site of the Atomic Bomb Dome, the buffer zone around it, and Hiroshima Peace Memorial Museum. He offered flowers to the Cenotaph for the A-bomb Victims.

Later, he met with Hiroshima Deputy Mayor Takeshi Komekami at Hiroshima City Hall and pointed out the "problem" of the appearance of the neighborhood around Peace Memorial Park. Mr. Komekani explained: "We have been trying to enact an ordinance that would impose limits on the height of buildings near the A-bomb Dome. But the area is connected to a shopping district, and our attempt has faced some opposition."