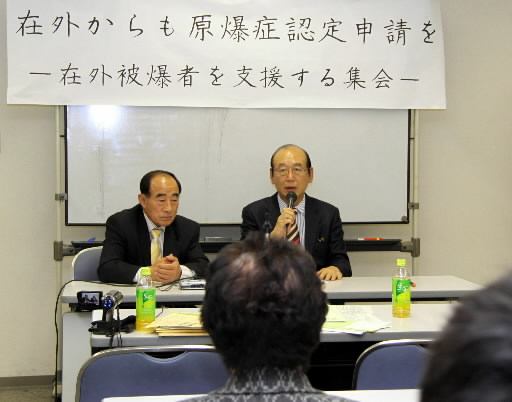 On November 8, a meeting that called for the full application of the Atomic Bomb Survivors Relief Law to atomic bomb survivors (hibakusha) overseas was held in the east wing of Hiroshima Peace Memorial Museum. Takashi Morita, 85, chairman of the Peace Association of Brazilian A-bomb Survivors, and Kim Yong Gil, 69, president of the South Korean Atomic Bomb Sufferers Association, took part in the meeting and reported on the current situation. They appealed to an audience of about 50 people mainly for enhancement of medical assistance for overseas hibakusha.

Saying that "hibakusha are hibakusha, no matter where they reside," Mr. Morita called for removing the limit on health care subsidies of 153,000 a year per person, provided by the Japanese government as extra relief measures for overseas hibakusha, so that hibakusha in Brazil can receive adequate treatment there. Mr. Kim noted that the cap represents discrimination against A-bomb survivors overseas, adding, "I hope the Japanese government will swiftly resolve this issue from a humanitarian standpoint."

Support groups, too, voiced requests, one after the other, that it be possible to file the application for A-bomb disease certification from overseas as well.

Mr. Morita and Mr. Kim will exchange ideas with a group of Diet members also seeking to apply the Atomic Bomb Survivors Relief Law to overseas hibakusha. They will meet with the group, comprised of Japanese parliamentarians from various parties, in Tokyo on November 13.