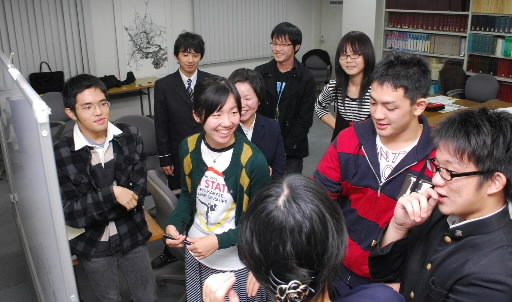 Junior high and high school students in Hiroshima and Nagasaki, devoted to the cause of nuclear abolition, have begun work on writing a "peace declaration." The students, who view their efforts for nuclear abolition as a personal mission, will complete the declaration as early as the end of November and disseminate it online and through other means.

The students are members of the "No Nuke Network: Students of Hiroshima Against Nuclear Weapons" in Hiroshima and the "10,000 High School Students Signatures Campaign Executive Committee" in Nagasaki. The groups engaged in an exchange activity on October 7-8 in Hiroshima. Three members of the Nagasaki group suggested the idea for the declaration and the 12 members representing the Hiroshima group readily agreed. They drew up a draft after making a list of such important factors as the horrifying nature of the atomic bombings and Japan's wartime role as an aggressor.

The draft points out that A-bomb survivors are still suffering to this day and declares, "We, who were born and have been raised in the A-bombed cities, see it as our mission to call for the elimination of nuclear weapons." Mitsuhiro Hayashida, 17, a junior at Nagasaki Kita High School, expressed his enthusiasm for the project, commenting, "I would like to let the world know that Nagasaki and Hiroshima share the same wish of abolishing nuclear weapons."

The students will exchange views through email and other means in order to finalize the declaration and post it on the homepages of both groups as well as promote it at the schools attended by the members. They also plan to translate it into English and distribute it to high schools in the United States.